We have several hunting areas, with most of them being accessible through teleport areas and others that you can only find out by exploring.
And as you progress you will be able to move through different cities and new challenges will be presented for you.

Attributes
As you level your character, you'll attain attribute points, which you can invest into 5 different categories which are: Power, Intelligence, Vitality, Agility and Luck. Each of them translates into a different set of bonuses. Attributes may also be present in your gear. 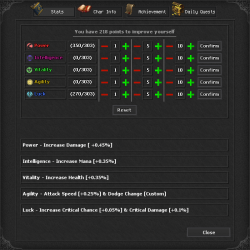 Monster Class
When you're leveling, you will notice that some monsters will have skulls under their names and what that means is that specific monster is a special one and will have improved stats such as more damage, health, speed and better loot as well. There are 4 different monster classes, strange being the weakest and legendary being the toughest, and each one of them will provide you with a guaranteed monster orb.

Equipment Rarity
Upon collecting a monster orb you have a chance of getting special gear with its rarity corresponding to the monster class killed, for example: a strange monster can yield you gear with "strange" rarity and will have higher attributes if compared to the normal version of it. Therefore, killing stronger monster class will yield you with stronger gear, making them valuable and sought for. Relics
Relics are a new equipment type, obtained through quests bosses and task bosses, being stored inside the relic container, which can be opened by using the Relics button in-game. Once clicked, a container will open and you will just need to drag and drop the desired relics you want to use in there. You can only equip a maximum of five different relics, meaning that you cannot equip two of the same relic. All relics have a special bonus, which can be an increase in gold given on orbs, more experience upon killing creatures, etc.

Guild System
Unlike normal guild systems where it's just a way to gather players under a group, BlackTalon has special features that makes guilds much more beneficial. Guilds can also level up and with that gain several bonuses that helps only those who are part of a guild, if your guild has enough levels, that is. You can earn guild exp by doing daily quests and daily bosses while being in a guild, which will count towards the exp required, located at the guild menu. Perks comes from each leveled up a guild goes through, and they give bonuses such as:
​
​

Achievements are milestones that can unlocked after doing something, be it a certain task single or multiple times or something entirely unexpected. Character Info
Staying fashionable in BlackTalon is not purely cosmetic. Collecting all sorts of addons and mounts can add up substantially to your character overall prowess, thus making it easier to progress through the BlackTalon challenges. You can check your total bonuses by either using the command !info or going to the others menu, located at the top part of the client, as the image suggests.
In your character info panel, there will be a small window called Cosmetics, which is where you will find information about your cosmetic bonuses.
Cosmetic Infomation Addons and mounts are divided into four different categories, each giving better bonuses than the previous. A table is organized below to better comprehend the difference between cosmetic tiers.

Bot
Our game client has an inbuilt bot functionality to ease your gameplay. You can open your bot by clicking

this icon located at the top right.

The Best otserver that I've ever played...
I played the beta test and it was awesome.. the attribute system is perfect... I've felt free to do what I wanted.
The monster orb system is a big surprise. The creature isn't the same as all, a big damage dealt, makes the hunt a big surprise to stay alive. It's completely awesome.. I loved the beta test and I'm looking forward to the official release..
Last edited: Jul 18, 2021
M

Great custom ot
Will be there on start
OP
OP

To participate in the Giveaway you need:

The draw will take place on 7/23/2021, stay tuned that we will announce the winners on the facebook page and also on our discord!

Im gonna enter. Looks cool, but hope its not another 3 weeks gameplay ots.

Lets see how this plays out.

After false promises and other bad shit in the past from other servers, this finally looks like something promising.
R

Looking forward to launch, refreshing to see a server that the staff are passionate about.
T

Veggie said:
Lets see how this plays out.

After false promises and other bad shit in the past from other servers, this finally looks like something promising.
Click to expand...

We have been played the beta test for 4-6 months. All of this time as beta test, yes, we have a promise server.

definitely a server to play.. you dont get bored that fast and theres always something to do. definitely recommend also blinkz has a small penis

3 days to go until official launch!

24 hours to go until official launch!

follow the rules for a chance to win the items in the image! 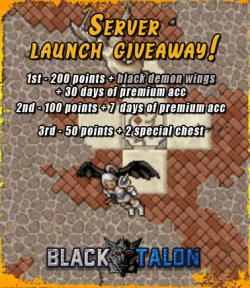 Is the server Free To Play ?
OP
OP

WAkeAndBake said:
Is the server Free To Play ?
Click to expand...

It is mate, have few items on store but you can get them free, just need grind a little bit