I'm curious if anyone would be interested in map shapes to be used as a bit of a templated resource for building new worlds?
I'm very bad at small details (I can't map out a mountain to save my life), but better working at a macro-level.

If I were to create and publish a bunch of map shapes such as the one in my spoiler, would any of you be likely to use them (where in part or in full)? 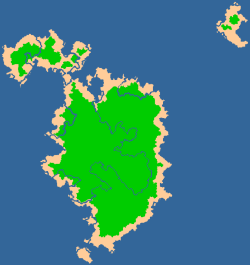 I considered this to be part show-off, but please let me know if this is not the right board.

River has no begin and ending (i guess there is purpose in this so one could cut river wherever wants)
I wish when people map rivers in a way they start somewhere in mountains with little springs, go through continent and when they join other rivers they are making wider and wider.
Then they should curve a little and you could see some ox bow lakes and swamps. There are some river deltas that doesn't end in sea/ocean like okawango or sudd (of river nile)
River can also make ravine and cut through mountains making more narrow or even go underground for some time like in croatia.
But it looks awful when river has 20 sqm to the sea and then it turns west and goes for another 500 sqm
I think this should be already considered by You in map design rather than by mapper

I think some type of asymetric vegetation should be already made by You: so let's make southern part more humid and northern dryer, then grass will either be closer to coastline or further,
Idk, someone once asked me for skeetch of map, I made this, connecting all mainlands: there are some leftovered lakes from glacier and you can even detect its direction and that it statred in mountains, sandy beach is not only in desert but also greenlands creating long penninsula. There are dried out lakes, asymetric mountians, desert from one side, rainforest other side...

Well if anybody likes it, can use it. I don't have editor anyway and don't even have idea how to update server and sprites and anything with new content when i already edited old and don't wanna loose it... tons of pointless advises, no one clear manual how to update your server

I've tried to keep it light on details to act as a template where the mapper can add mountains, etc. in the 'middle' of where the rivers are to give them an originating point, and fill in the biomes in a way that will make contextual sense when imported and placed against existing map. This is just a 'shape' to use, not meant to be complete generation - keep in mind the size is also quite small; this is just meant to be one landmass in your world - not a full map like your design.

I do have the ability to do generate landmasses with biomes that make more sense though, happy to post some examples
J

How did you go with this? i was about to start a series of larger islands to map. Pre generated island would work alot easier.

nugo said:
How did you go with this? i was about to start a series of larger islands to map. Pre generated island would work alot easier.
Click to expand...

You can try this tool too: Open Tibia Map Generator (https://inconcessus.github.io/) and use generation settings similar to this to create random islands: 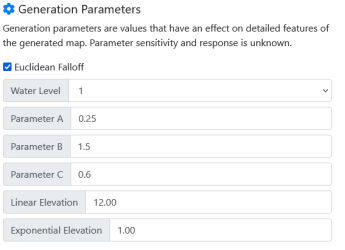 @Forby The canvas preview doesn't work for me when I generate a new minimap.