Download link for windows client is broken at your site
OP

-Added a new zone for players above level 500. The monsters there currently have the best exp to hp ratio. 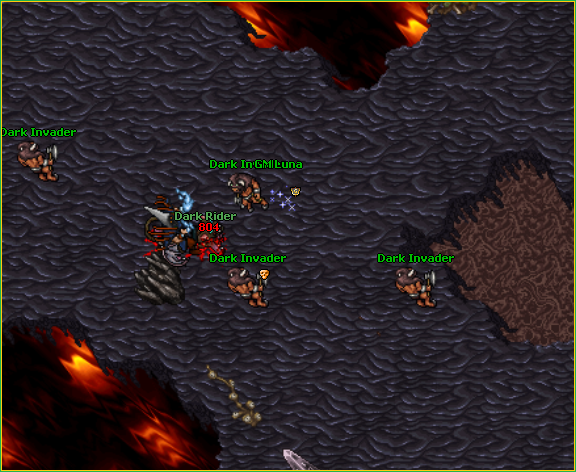 -Paladins got a new spell for level 450, it increases their distance skill by 10% and gives them "split-shot".

-Utito mas vis changed, now it gives 30% increased mlvl instead of 15%. The cooldown is also lower.

Some restrictions on high lvls botting lower lvl spawns would be nice. Was trying to task but a lvl 500 was botting barbarians, then 20 mins later he returns from afk to tell me to leave.....

Yeah, server is pretty nice but botting is taken too easy. I'm okay with the fact that you can use it but at least not full afk.
OP

I have heard you guys and I agree that botting is lame, I already have plans to update to tibia 11 in the future which should eliminate all the botters. I'm extremely busy irl now and can't work on the server that much so the server will stay in it's current state for now with some small updates coming soon.
OP

If you still haven't tried the server, I would recommend you to give it a try

Sorry! I had the wrong ip there for a moment, it's fixed now

Clever ot, but i find some bug whit task npc, if u complete a task and u talk to him and dont report it, u dont take any reward :S
I find it whit the 300 frost dragons task

So i dont take my random attributte point
If u can help me, reset my storage to star new frost dragon task

hello! so I played another server now for awhile and it motivated me to work on this server again.

if I gonna open this again, would u guys like to see only me allowing otclient? I did work on it for last time server was online and I got it into a nice state I think. And this time I would advertise it more and maybe even make into pvp enforced. What do u guys think? And otclient could maybe even have healing bot inside the game because i know all peoples that plays evos like this enjoy using that and also for in an ot like this its very annoying to heal urself every second.

Please do some comments and let me know what u think!

And some news, unfortunately I will stick with tibia client 10.98. I have tried otclient and I did a couple of cool mods for it but in the end the client has lots of performance issues and visual issues that I can't fix on my own with the newer protocols like 10.98. I did try contacting some server owners that have good otclients, diath did give me lots of tips on how to improve it but it's too much for me to fix on my own still. I also tried tibia 11, and I got it working but there's lots of issues with that too, for example with that client we can't have new sprites and it's very hard to edit to make it more custom.

So in future the server will be 10.98 client with new sprites and such! I will share some screenshots soon and the server should launch in the next month! Just a quick screenshot of some testing! We added functions to change creatures names and we will create a formula that should calculate monsters strength, and with our new function we can use that to add a level to every monster.
Last edited: Jun 20, 2018
OP

Small update on what I did today!

Today I rewrote how all skulled creatures works, and I added levels to monsters! Now every monster has a baselevel, and for example if a monsters level is 100. It can spawn between level 80 and 120. If a white skulled creature spawns it will be 50% higher level than that, and we also have weaker monsters such as yellow skulled monsters which are spawned from "strongboxes" that can spawn in every spawn, they will be lower level than a normal monster since they spawn in huge packs. We have also made it possible for players to walk on yellow and orange skulled monsters. With our level system we can also spawn any creature at any level, so for example we could spawn a rat at level 300 and it will be as strong as a lvl 300 player. We have also created a formula that monsters will use to determine how strong they are, before we would have to write a monsters health, experiece, and all of their attacks damages down manually in a file and then test it to make sure it's balanced and rewarding enough but now all we have to do is write down the monsters level and it will automatically receive experience/attacks and health based on the level we gave it. This will make it super easy to create new balanced monsters. If anybody is interested in testing the server, please send me a message! I will definitely need more support staff when the server goes live!
Last edited: Jun 22, 2018

Today I made a new ZONE TYPE. Think of protection zones. In this new zone, you can attack players but not attack monsters. This will be used inside every spawn and quest instead of protection zones. This will allow players to get back to the city even if they are skulled/is pzlocked. In most other tp servers, you would be stuck inside a spawn/quest till you lost pz and that to me was always boring! But with this new zone type it will fix this issue, so if you've killed a player you can still navigate through the map instead of being stuck. We also might use this zone inside the teleport room, which means you would be able to kill players there! But maybe that's too far XD but it could be limited so that you can only attack skulled/pzlocked players. Let me know what you think about this new zone. Anyways, if you're interested in trying out the server I will give out the ip in a couple of days to those who are interested. And we are planning to open the server for real next month with much advertisements.

Here's another small feature that will make it easier to locate players and make pvp easier! Exiva will now tell you in which spawn/quest a player is located! (the double name will get fixed)

When is this going to open?
OP

Hello again! The server should open for testing in probably around a week, there is still some systems I want to add, for example bosses that will spawn inside spawns and drop useful items, and they will have long respawn times and u will be able to see when they spawn with a !boss command. I also want to change how armor works and how wands and rods works, they will have attack like paladin and knights weapons. And I will remake armor into a good system that makes it actually useful and you will be able to see how much the armor makes u reduce damage.

A new command that gives info about what npc buffs u have, we had this system before but there wasn't any easy way to check what buffs u had and what buffs u didnt have yet.

I will message everybody with ip to the server to those that have messaged me and shown interest and probably post it on otland too when I completed the systems I want but that server will just be test server and to make sure everything is working! And at end of july it will be advertised on otservlists with countdowns and more stuff so its will get popular.

from what I've seen, will have several teleports for monsters, do you think it does not take away some of the fun to play?

would not it be better to make a continent?