These days I was taking a look and found the Craft system provided by strutZ. I thought it was very good and decided to put it on my server, because I'm trying to make it as RPG as possible. I followed the step by step and made only a few changes in Nomenclatures, nothing that influenced the structure of the code. I installed the system without problems following the information in the Post. But when I went to test it, I found the following Bug: When trying to create the item, the items are removed from the backpack but you do not receive the Item that should be created. Can someone help me with what could be happening? Below I leave the System Link that I am using so that they can give me this support.

Hello, Wasn't going to release this because there is already a couple but open source right? Like always it is using @Non Sequitur modal window system which can be found HERE You will have to install that in order to be able to use this system. Pictures Main Screen Selection Screen...

otland.net
In the system provided by strutZ, the craft categories are divided by the basic vocations of Tibia. But as I understand it, that would only be symbolic, and could be changed to other information. As an example, I made the changes only to the nomenclatures of the categories and were like this: 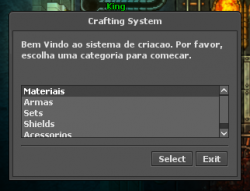 as I mentioned before, the system does not present any error in the distro, but when trying to create it, the necessary items are consumed and the material that should be created is not delivered to the player.
Sort by date Sort by votes

I whore myself out for likes

I'd suggest installing it without any modifications, to see if it works in it's original form, before modifying it.

Possibility you did nothing wrong, and it's just broken to start.

Hard to track down an issue if we don't know exactly what was changed, even if you believe it had no relevance.
Upvote 0 Downvote
OP
OP

ah I managed to solve brother, it was a basic modification I made on the lib file that was causing conflict, but I changed it to the original and it worked
Upvote 0 Downvote

Lua Adapt systems that use XML into LUA?

I need a ModalWindow tutorial

verify if item is equipment