hello guys, I have a problem, I don't know if anyone knows how to solve it, but I'm using OTV8,
well what happens is the following, I open for example 6 bodies, but my screen only holds 4 bodies on the side, so let's say that I start to close the bodies from above, the ones that didn't appear before start to appear, it's as if it was a bug that the other bodies opened but they do not appear for me, and when I give space they appear, but I wanted to leave it as the original tibia, if I open a body more than the space supports, then it opens over the last body open. 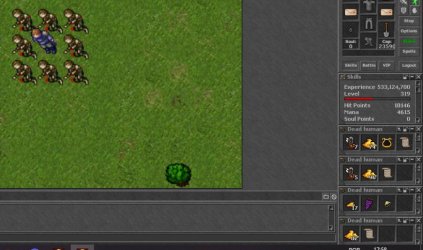 Sort by date Sort by votes

This is client modifications for 7x version of tibia it is yet ufinished however there is few features: -hotkeys are disabled -cant target player on battle list -working extra panels with no dragging bag to middle of window (credits : gesior) -classic look Todo: no IP displaying or even older...

Could you tell me which module I can solve this problem? is that my client is 99% ready, there is little nonsense that I need to finalize
Upvote 0 Downvote

I do not have time to check it
Upvote 0 Downvote