I want to talk about layout, having a good layout ensures that the game’s movement flows for the user. Achieving this will ensure the most pleasant gameplay and enhance your maps a lot. remember that this is my opinions and its not strict rules but more guide lines. hope it helps someone!

Getting into the habit of making good pathways for your hunting grounds will make sure your players have a good amount of space to move around. Using most of the decorations on the side of the path makes for a much cleaner look and easier to navigate.
I’ve made 2 examples for the purpose of this tutorial. 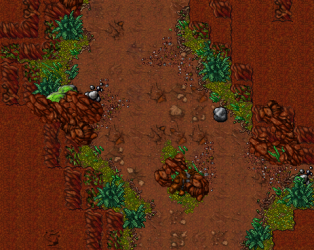 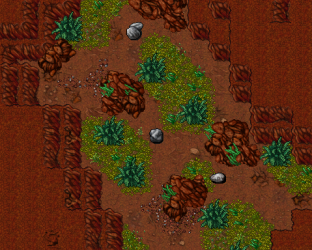 As you can see in the first image to the left, the details are pushed out and follow the sides of the cave, this makes for a much cleaner pathway for the player to move around.
On the second image the details are more all over the place and it does not look too good and is clunky when it comes to gameplay and moving your character.

I would like to go over my thoughts when making the path in the first image.
I wanted to have a clean path for the player to walk on, But i also wanted something in the middle of the path that the player can use to kite the monsters chasing them. And I wanted to have some spots that help the player control how many enemies are hitting them at the same time.

Don't be afraid to have somewhat big empty spaces, every square does not need to have something placed on it, and if you feel its too empty try mixing up the grounds and borders and use walkable items like gravel or grass tufts to fill in the blanks without changing the way that the player have to walk to get from one point to the other.

Having some tight spaces around the hunting ground is not a bad thing, to be able to control how many monsters to fight at once, locking yourself into a bottleneck making sure you only fight one or two enemies at the same time. This comes in handy for players that are maybe a bit too weak to hunt this spawn in a comfortable way.

Now that we have talked about the spawn on a small scale, let's move on to the overall feeling of the spawn and its layout.

One spawn I would like to use as a good example is the first floor of edron earth elemental cave. It's not perfect but it's much better and more fun to hunt in terms of player activity. 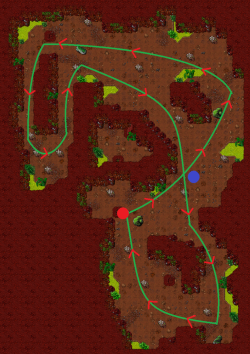 When you enter the spawn at the red dot, you can follow the green path that I painted for you. (hope you like my painting skills)
And the only time you walk at the same place as you did before is at the blue dot.
It’s a small spawn but because of how it is designed the layout ensures that the player will always face some enemies and that they will have the time to respawn before the player reaches that part of the route again.
Doing this creates a much more engaging hunting session with less downtime and if you combine this with a good looking environment the players will love to hunt here.

Now the example of this tutorial has been caves but this can be applied to all sorts of hunting grounds such as tombs, mountains and even cities.
Making a suggested route doesn't mean you have to make every spawn so that you can walk around in circles but having different routes that the player can take is to make sure that the hunting session will stay action packed and have as little downtime as possible.


Summary of this tutorial​

Keep your paths clean, push decorations out to the edges and use walkables in the middle.
Have a suggested route to walk so players don't have to double back the same way.

here is a link to a pdf file if you feel its easier to read like this
effectivelayoutpaths.pdf (https://drive.google.com/file/d/1WyD8MtRkn-xy_1ZqoVHOkAsxrtJylgAU/view?usp=sharing)

liked this tutorial? make sure to join our discord "Mappers guild" for more tutorials like this.
have a great day!

Every hunting ground has its own kind of style.

If you want to create a cave for single target hunting for ranged characters (paladins or mages) - make it as wide as first picture in this tutorial with small obstacle in the center to allow kiting.

A place for single target ek hunts, should be very narrow or have corners in which he can fight 1 or 2 monsters (example: larva dungeons/termites zao). Alternatively you can build the spot the way he'll be facing 2-3 enemies or lure as much as he can handle (for example sea serpents area, dwarf mines or wyrms lb).

A spot for aoe hunting (mages) should be a big place with no obstacles in the middle. The mage wants to run in circles to gather all monsters in the center and spam ava so any obstacles are unwelcome (example: banuta -2).

Now if you want to force the place to be ek+ed only, build it like draken walls - not much space to run in circles, but also no corners for ek to hide so they have to duo hunt it.

If you want the spot to be universal, you can make it easy to enter (no monsters near stairs) and fill it with monsters that will avoid fields, but also distribute monsters the way they can be hunt either one by one or in groups (example: gs/cyclops poh or svar mines floor with obelisks).

This knowledge shouldn't be ignored because designing the hunting ground for each vocation has a huge impact on server economy and vocation distribution.
Last edited: Aug 22, 2021
OP
OP

Great addition to this tutorial @zbizu it's something to have in mind when designing a hunting spot!

also the hunting grounds can regulate favourable vocations by what monsters you put in it:

monsters dealing opposing elements (eg fire and ice) or being immune to most forms of magic and weak to physical damage will make the place less attractive to mages
monsters strong against physical damage (or immune to it like ghosts) will make the place less desirable for physical vocations (one of poi/inq caves for example)
fast monsters in environments that don't allow much speed may discourage ranged vocations to hunt in it (eg sea serpents - they're fast, you're slow unless you have 200+)
fast ranged monsters with strong ranged attacks may discourage melee vocations (idk, lizard legionnaires in large groups?)

bonus: areas full of monsters resonating with various vocations (like poi, inq or warzones) that are difficult to clear solo but have good loot can be good for teamhunts, although I haven't played all vocations teamhunts enough to have a deeper understanding of it.
Last edited: Aug 22, 2021

A
Lua Is it possible to interact with the map and/or cpp pathing logic in Lua?

H
Why does OTClient come with such a laggy walk

N
Respawn with effect and player on screen