Hi! I was copying my files from a OTX 3.8 datapack to TFS 1.4 downgraded by Nekiro (8.60) and did a copy of actions folder and monsters folder from my OTX datapack (the idea was to test which action/monster from my old datapack could work and which cause bug), then, Then started up my TFS 1.4 console and get a crash (was expected to), but after that I redo the folder to the initial state (copied actions/monsters/items/everything of the original repository).

After doing that, the server crashed on startup again. Then switched my database to OTX 3.8, changed config.php from Znote to use the OTX database instead of TFS 1.4, but OTX 3.8 can't start either after all of this happened. I don't know where to find a crash.log to see what happens, but I took this two screenshots by recording and booth are crashing when lua scripts are loading. I also re-compiled both servers and replaced with back-up folders to return to the original state without success, what happened and how can I solve this? 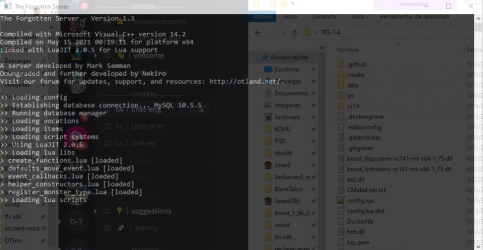 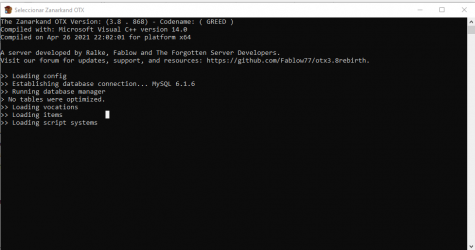 Converted to TFS 1.4 got Lua Script crash on startup.