Information:
The liombera server, already accessible to players, is our first project, and which is important to us, we are French and have known tibia since we were little. We are 3 Friends we wanted to develop the same world as Real map, but in parallel with zones customized in our own way, already.
To avoid the length and heaviness of the quests, the majority of the restrictions were removed, that is to say the areas are accessible, like the biggest bosses, quests, doors, access or the customized bosses.
Because of the coronavirus and our work, we didn't have time to make the announcement, and we apologize.
In total, we have introduced, 5 new towns, Freewind, Mordragor, Falanaar, Mistfall and Dolwatha. Each town and area includes an appropriate ecosystem, with hunting areas ranging from level 10 to level 500+.
The server obviously has autoloot, everything the latest version has, quests, missions, if you want to play the rpg way. And if it doesn't exist, we create it!
I suggest you discover the last update dated March 3, which introduces the forge system, with new weapons and equipment to create by yourself while using a crafting system and hunting monsters, from the simple to the rarest!

Minimap about the new hunts zones

Thank you for taking the time to read us, have a great day,

Small Up for inform about new update incoming, special Thanks to the community of Otland and opent tibia sprites on github for this sprites.
There a small part of items changed, also some monsters like Dragon & Dragon Lords has been changed ! 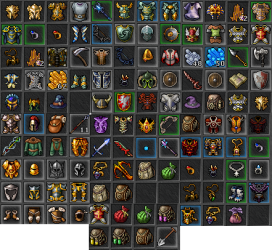