Probably you have heard already of the ongoing development of a unity-based client.. I'll go straightforward with the topics related to this thread..


While I haven't yet tested its performance in every aspect, it's still easier to write a non-managed code to resolve issues such as "Creature status drawing".. I am using TextMeshPro which is known for its powerful performance and continues development.. We don't have to bother a lot with it as it has its own caching algorithms.
The estimated time of release isn't yet known, but I expect to release a beta build in a few releases..
However, to help finance myself, as the project took a loooooot of time to investigate the game and find the best ways.. I will release the client for patreons..

The client doesn't include any enclosed code.
The client is currently hosted in Unity's collaboration service. So if you would be given access to test it, you would need a unity account.

The project is written in C# and that's only for the alpha stage, on beta the CoreModule will be released in C++.. So the client is actually having several bottle necks and might have FPS drops on drawing because it's using a high-level drawing function to draw 1600+ textures at a single frame.

So, why alpha? The reason is to view the powerful aspects of the client, also, the beta version will not take a lot of time to be released, in fact it will be a very few weeks until it's released!

Why UnityCollab? because when an issue happens, and if you are connected to the internet.. I will get full details of the error helping me, and later you, resolve the issue.
Screenshots are viewable in Imgur:
OpenTibiaUnity 1.2a Screenshots! 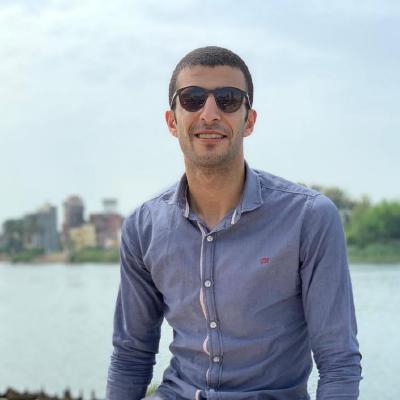 Donations are accepted in paypal directly, make sure to do it as a donation to reduce the costs: Paypal address: [email protected]

It's not required that you support the project, the project will be at the end an open-source but for now, i will keep it only for patreons to help continue developing the project..
Last edited by a moderator: Apr 24, 2020
OP

The client is based on a sprite-atlas project:
Converting .dat, .spr to a sprite atlas.
Last edited: Dec 23, 2018

Whats the difference betweens this client and otclient if I can ask?

I do respect you for committing into doing a new client.
I do respect you for doing it (at the end) open-source.
So please don't get me wrong, but tier pricing is a little too high. I'm not saying that this project is not worth that money. It is for sure. It is worth way more.
But those patreon prices are per month and it's too high.
If someone will support you with 100$, after a year he donated you 1200$ for the project that will be open-sourced at the end anyway.
I would rather have 20 patreons for 20$ than 3 patreons for 100$. I know you are not doing it for money (if you would, you would just do some freelancing job that would be worth way more than this), but think about it.

Just my opinion tho. I, once again, love to see how it's OTU in tibia's life. And I do believe it'll be better than OTC one day.

~Matryx
The difference is the way its handling things, you don't have to handle most of the things that are complicated.. i.e text fonts..
Besides, it's very easy to design in for visual designers.. For code, it's easier to debug and write a code.

I am not very familiar with patreon. But all i want is just you picking a single donation for a single month (only one payment per once person)!
I will look up into making this static or single-time donation.

Do not make new client's, don't waste your time, there is actually OTC that need some improvemtns to be perfect.

Nothxbye said:
Do not make new client's, don't waste your time, there is actually OTC that need some improvemtns to be perfect.
Click to expand...

@OnTopic
Very nice work you are doing for the community!
OP

I've seen slavi work countless hours developing what I consider a very promising client for the near future of open tibia, unity is a far more developer friendly engine. I'm really looking forward to it's possibilities when more people gets it's hands on it!

Best of luck and hope you get a lot of patreons @Slavi Dodo !

Nice cant wait for it to finish I wish you good luck!

Its funny how many are bashing OTC dont forget it was the first client outside the tibia client and some stuff might be the base of this client Im not sure tho, I just feel like OTC shouldnt be bashed like that.

Even if you're doing good job, tibia is dead.

As stated in the discord channel:
The lightmap renderer is gonna be split into 2 branches:
1. Legacy lightmap: consuming most of the time* in CPU and is not very efficient compared to per-pixel lighting. It's there for minimum required support of lighting.. It's gonna be fast if CommandBuffer (shaderlab 4.5) is supported as it makes it easy to pass buffers directly to the plugin instead of calculating them in c# and passing per-vertex data.
2. Per-pixel lighting and is gonna rely on shaders to draw (blending all the available lights at some vertex at once) this avoids bubbles or drawing more lights than intended.. This is mostly for modern GPUs and is consuming time in both CPU and GPU, but far less than the time consumed by the first method.

Because of both of those methods, it's then very easy to draw the WorldMap
1. GPU instances if supported, as stated only OpenGL 4.1, DX11.. Which then avoids the amount of calls to update the program
2. DrawMesh if reliable/DrawTexture (so far so reliable).

Legacy lightmap renderer (not including names yet) 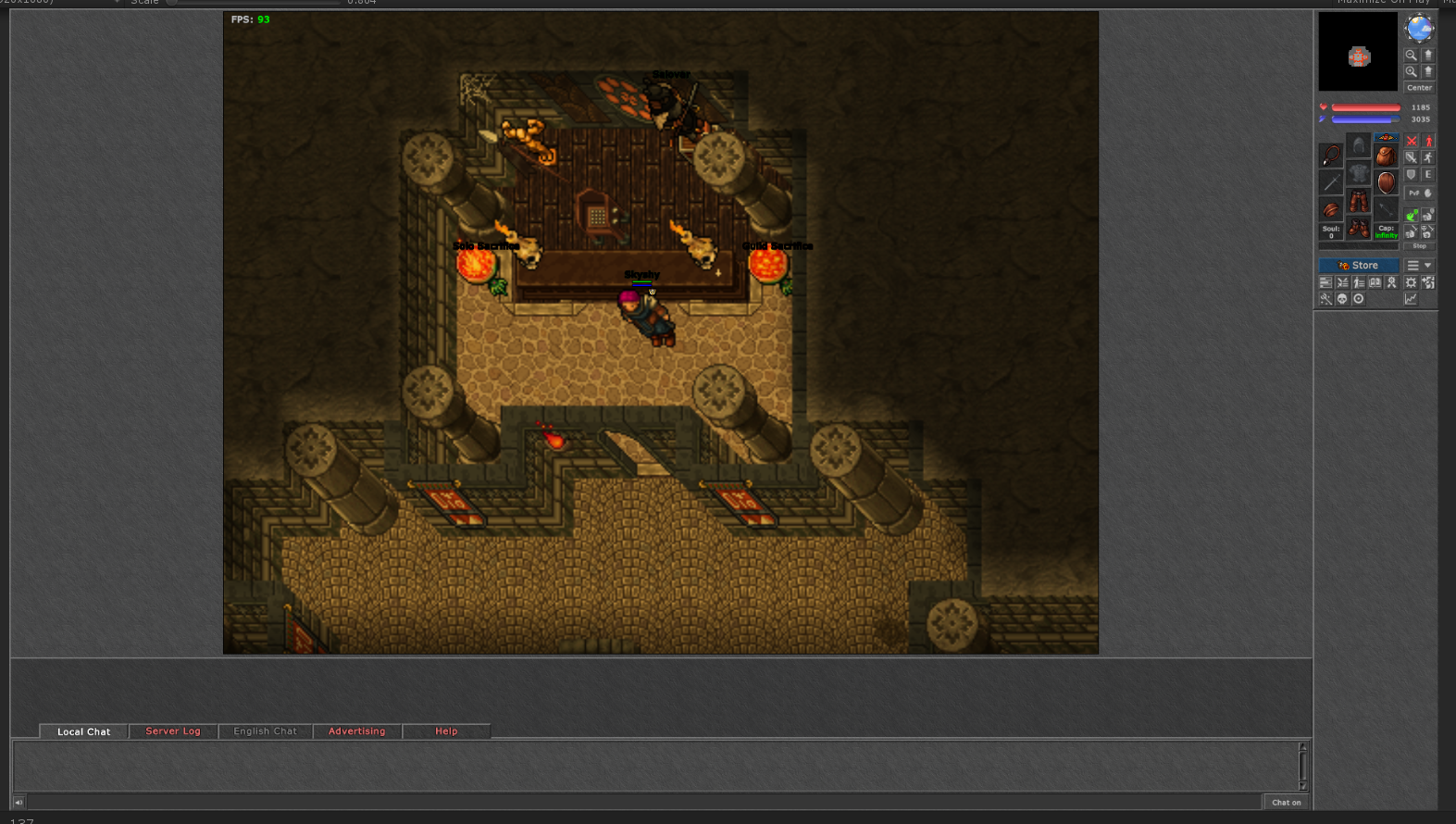 Even if Unity has a high usage rate, why would you go with Tibia? Just make your own game and I'm sure you will succeed. In my opinion, you're just wasting your time employing on something that will not give any benefits to Open Tibia.

If we have the most stable client as standalone, or as OTClient which does the 99% of client work properly, why would you go with new bugged one?
OP

A fun experiment and a learning path!
There are a lot of logic behind how tibia is working!

well its ofc nice
but why u shareing this stuff?

just to get some money on patreon? or because u actually care about community and want new client for peple, u said its gonna be opensource so i guess its this option ?
but then u have already fixed majority of otclient issues, why not release that stuff? like walking animations and idle animations are two big issues that you have fixed and that many people would want
OP

I mentioned that those issues are gonna be fixed before the alpha release..

I also said that the client will be released at 1.5a (it was 1.2a). The last cloud build is 1.4a so we are just 1 update away from public release.. Which is now taking care just of the last 2 things.. Pathfinding (partially fixed) & Lightmap.. There is a progress already.

Why am I sharing this?
I did it at first to get to learn things about graphics. yes, I do care about more community.. money? it's an option and would be ofc good to motivate me to work actually. However, whether there is donations or not the client will be public. and I actually told that to a donator.

The project under any situation will be public sooner or later.. A matter of time and you can then enjoy pushing to it. I don't wanna false claims at this early stage, but i believe the rest of issues and even existing ones can be resolved pretty quickly!