[Canada] [Custom] Return of the Saiyans

Evil Puncker said:
do you think it is wise to launch a server the same day cipsoft is going to launch three new worlds?

(not regular worlds, but hardcore worlds, the most wanted ones)
Click to expand...

lol who cares about cipsoft and it's entirely different game too.
OP
OP

In today's update, we're adding a possibility to change character class without using Dragon Balls! It can be done in West Capitol at the Capsule Corp headquarters. (depot). It is completely free till level 150, but after that the cost is 1000 zeni and 0.5 Fire Opals per level. When changing the vocation, we keep all the skills, but they are converted into the class we changed. What's more, every character will have its own exp boost. In addition, all the passive techniques from Shenlong wishes will be moved from character to character, and any Dragon Ballls used on skills of the same group will be refunded. You need to keep it mind that while changing the vocation you need to be unequipped. Last but not least, don't forget that you will gain experience twice faster for mobs on a new character until you reach the same level as on your main. 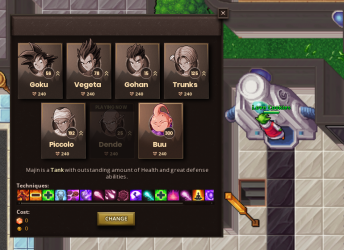 Hi OTLanders, we heard you're looking for new adventures! That's why our good old friend Jack - The Hunter - is visiting us this weekend.

Jack will be visiting our capital, the West Capitol this weekend (between 27-30.08) to see how much you've grown since last time! : Last time Jack gave away almost all of his caravan, so this time you can expect a smug grin as you collect your prizes! 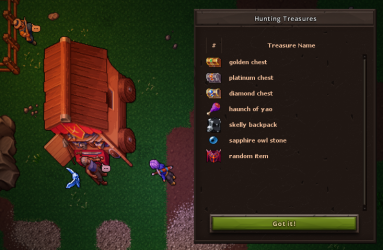 Of course, the rules remain the same - the more blood you shed, the more rewards you will receive.
Between us... Jack secretly told me that he was disappointed that no one picked up his family Puar from him last time.... Make an effort this weekend as this prize is very unique!

A gate to Robotic Island in CC Lab. has been unlocked! To pass through you need to complete 1st and 2nd task room + you need to possess a pass which can be purchased for Strange Crystals at NPC Lab. Warehouseman. The gate is located in the way of task rooms. After entering the Island, each player will have 30 minutes (the time resets after Global Save) to fight with monsters. It pauses while fighting with bosses though. Don't forget to say "Hi" to NPC Pinach there, since he might be interested in trading your Boss Tokens. 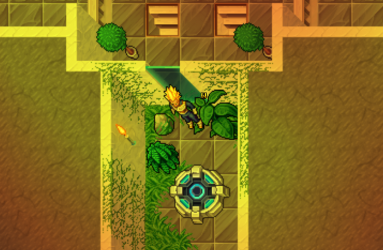 Many of you like questing and tasking, that's why along with today's update we're adding a possibility to repeat daily missions on both, Regular and Future Earth. Due to that fact, there will be more fights with bosses and it means more epic items in game! We hope, it will encourage you to visit Professor Tusk and Emradel more often. 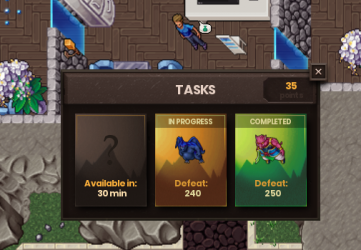 Some time ago, we promised that there will be an option to resign from RNG of loot from World Boss - Cell. After today's patch, players who participated in defeating Cell will get an item called "Single Cell". You will be able to sell such item to other players or simply open it to get a loot. Keep in mind, that Villain Backpack and Perfect Cell's Wings will be still available directly after killing Cell. It won't be possible to loot such items from "Single Cell". In addition, we added a special bar, which will show you your loot progress.

Recently, NPC Rubio has been complaining about the lack of customers. We're trying to keep him in business, that's why after today's update, completing the Rubio quest will no longer be required to upgrade the jewellery. However, you need to complete it to be able to trade with him. He also mentioned that Escargo needs your help again but you can help him only, if you own a license to trade jewellery. 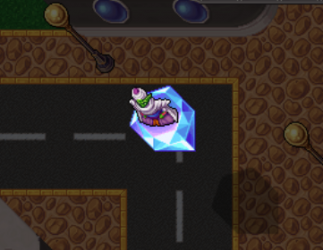 Many players have been complaining about most common (bronze and silver) treasure chests. We decided to make some small changes regarding keys crafting. It will be easier to get materials but it will cost more Zeni. In addition, some new monsters can now drop Dino Bones, Emeralds and Rubies. Feel free to check it out in RotSpedia (tablet in quest pouch).

Bulma is the next character class which will be added to the game! She will be a tanky support thanks to her Battlesuit! We started the works already! Wow, great idea with Bulma in battlesuit, never saw her as a character on any DB server.
I wonder what she will look like in her last form, maybe something like an iron-man suit, but made by Capsule Corp.: inspiration
OP
OP


Halloween Event!​
"Skeltal: Something strange is happening on the cemetery fields... I have never felt such evil powers. Everyone beware!" Shadows of a thousand years rise again unseen,
Voices whisper in the trees, “Near is Halloween!"

Ghostly Greetings, Saiyans! Spooky times approaching to Return of the Saiyans world! Starting from 18th of October to 8th of November there will be a Halloween Event in our game! "Ominous Bat" will give you some more information about the event as well as he will prepare some tasks for you! You will be able to find him in West Capitol! Happy Haunting!

By the way, don't forget to check our new and scary limited offers in the premium shop! 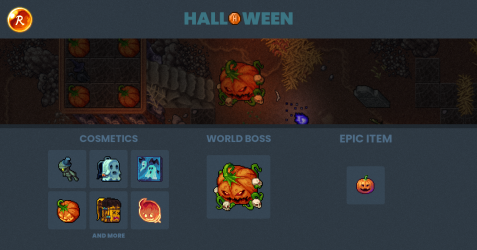