Lucas CP said:
In Brazil:
If you sneeze in the street, you get beaten up.

Absolute madness. Over one million infected by now. I hope you all are alright.

Live statistics and coronavirus news tracking the number of confirmed cases, recovered patients, tests, and death toll due to the COVID-19 coronavirus from Wuhan, China. Coronavirus counter with new cases, deaths, and number of tests per 1 Million population. Historical data and info. Daily...

DonHagman said:
Absolute madness. Over one million infected by now. I hope you all are alright.

Live statistics and coronavirus news tracking the number of confirmed cases, recovered patients, tests, and death toll due to the COVID-19 coronavirus from Wuhan, China. Coronavirus counter with new cases, deaths, and number of tests per 1 Million population. Historical data and info. Daily...

It's guaranteed more than that. I'd say closer to 10-20 million.
OP

Neon said:
It's guaranteed more than that. I'd say closer to 10-20 million.
Click to expand...

I can't argue against that. You're probably right.

I dont see problem, we got special forces

well, in Chile the capitalist, repressor, exploiter, among other disqualifiers, dont give a fuck about who has no money, communism and capitalism are two different faces of the same shit. Current situation is, 3404 people infected by coronavirus, public hospitals without basic supplies and nurses forced to make their own, 38.9% of the workforce does not have an employment contract and is equivalent to 3.6 million people that will not receive income during the crisis. As far as I know, among the countries of South America Ecuador is where the situation is worse, with dead people abandoned in the streets.
Last edited: Apr 3, 2020

I'd choose Capitalism over Communism any day.

We've been 20 days in quarentine and it doesn't look like this is ending anytime soon. May still be 2-4 weeks more. People here is starting to understand that when this ends we won't be able to freely go out yet like nothing happened. It's going to be slow and painful but its for the best.

Here in Brazil there are still lots of people in "normal life", most of the medium class and higher have started to work from home, thoose who can't are still working normal, a lot of people lost their jobs.

I live in São Paulo which is the biggest state in Brazil, so while I was already doing home office (maybe 3 weeks ago), my parents that live in another smaller state were still not even worried about it because the main focuses were São Paulo and Rio de Janeiro. Now the other states are starting to get on quarantine.

In 2018's president run, we ellected a right president (something like Donald Trump, but really just a 10x dumber version). He is one of the people taking it (still to this day) as just a flu and demanding people and states to already get back do normal life. The minister of health was the only person in the government taking it as serious as it is and he was fired this monday, but then they decided to take him back because they saw the backlash starting to come their way.

As other people said here, I think this shit is just starting and we are getting out of this quarantine in maybe 2 or 3 months just to get an even bigger breakout later.

There's been videos of people in my country (mexico) were they have family that have diabetes or whatever chronic disease you imagine and when people arrive to the hospitals, both nurses and meds tell those patients they have COVID and that they need to get to emergencies ASAP, they put that shit people uses to breath when they cant, and well o shit they die because most of people even if they're healthy may fucking die if they get installed that piece of shit on their body.

This is not a joke

quickedit: they go for their weekly/daily/monthly checkout for their chronic diseases and they're told they have COVID and well I already explained the situation.

Really odd shit, I know a person in real life that had this issue and she posted a video online about it, Im freaked out to be honest I know those people and they have no covid or some shit like it.

After 3 months, today we've got 0 deaths in Spain and number of active cases and new cases keep going down.

It's been 3 rough months with deaths peeking around 1000 a day for several days/1week.

We've spent almost 2 months in quarentine at home just being able to leave for food/job.

Since May we have started to ease the quarentine allowing people to go out more and more. Social distancing is a thing, facial masks were social distancing is not guaranteed are mandatory and habits like washing your hands, avoiding touching things or sneezing on your forearm are the new norm.

Luckily it seems the virus is less dangerous now (atleast here) as most cases don't even need to be treated and are just being followed incase complications arise.

Now we start another challenge. The economical hit that already is leaving many families jobless.
A

BahamutxD said:
Luckily it seems the virus is less dangerous now (atleast here) as most cases don't even need to be treated and are just being followed incase complications arise.
Click to expand...

I read an article about something similar being reported in Italy: the people with new confirmed infections are mostly getting mild cases.

Hopefully this means that the virus favors mutating into less virulent strains after circulating for some time in a given place. It's not 'herd immunity' because that requires >70% of the population to have been infected, which most certainly isn't true even in Spain or Italy.

its just a flu

Mayor of Itajaí Suggests Rectal Ozone Therapy for Covid-19 despite Lack of Proof.
Click to expand...

Lucas CP said:
In Brazil:
If you sneeze in the street, you get beaten up. 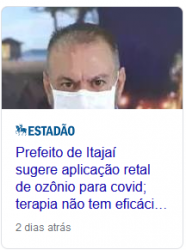 Lmao, in a neighbour city, the mayor is telling people to use a treatment that applies ozone through your ass :3

In Venezuela we are fine.(PD: I'm dead)

Last week I tested positive for antibodies. Which means, I suppose I had COVID at some point; asymptomatic this whole time. Unsurprising as I’m a frontline healthcare worker.

Magical tutorial on how to fix any error

Rosha-War, would it be Intresting?

M
There is a chance that you may have found a bug in the SQL parser. Please examine your query closely, and check that the quotes are correct and not mi

A moment ago
thebmadev
T

Workaround (TFS 1.3): player:addItem not falling to the floor when no space is left