~A small update on our "Test Game"~ 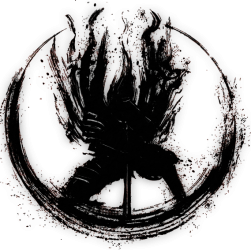 "Nelja'Eva has fallen, the crown sodden with dark magic. There is no hope as the land does cry, for mother's mana has run dry.

Be it as a human warrior, a dwarf knight, or an elven thief―the mission is to escape to a new land sighted on the horizon, but the Cataract cast a shadowy dome above the sky which has blotted out the sun and prevents anyone or anything from leaving. The Shade shrinks every day...infecting whatever it touches with wicked corruption.

The King and Queen already have the darkness whispering in their ears and the Guard has been tainted, striking anyone down who opposes the Empire's harsh rule. You work to produce for the Kingdom, or you are disposed of and fed to the Shade.

As a working Citizen or rebellious Gutter Rat going about the final days of Nelja'Eva, it is your purpose to find the Dark Heart that fuels the evil entity swallowing the world. To break the storm and allow the ships to sail may be the last thing death will allow you to do, for defeating the Cataract is inconceivable.

Will you quarrel with death or let the light slip into darkness?"​

It's been a while, and a lot has changed.
We've been still hard at work with much we don't want to share until it's ready, and much work is still to be done. One feature that's being developed right now is focused on PvP while still being a key PvE aspect.

Scattered around the world of Azakelis, players will find Forts/Encampments which are bastioned and home to rogue Setters or new world creatures. Upon clearing a Fort and defeating its "Chief," a player can claim the Fort so as long as they're Active (online) and within the allowed distance threshold. It will also be tied to the Alignment of the player who claims it (more on this further).
Forts claimed by players will become "Safe Zones" from monsters and violent NPCs, as the guards defend and deal high damage while there are healers in the town that heal for free, and merchants to sell general loot. Players of the opposite alignment whom approach the fort will be warned of hostile defense if they cross the bridge/gate.
Opposite alignment players can attack to claim the Fort. In order to Win claim over a Fort, attacking players must defeat all NPC Guards, which then triggers the "Chief" mini-boss to start. Defeating the Chief grants the player who receives the "Killing Blow" battle achievement to Claim the Fort. Alternatively, killing the Claimant Player grants an instant Victory, not needing to kill the NPCs or the Chief. 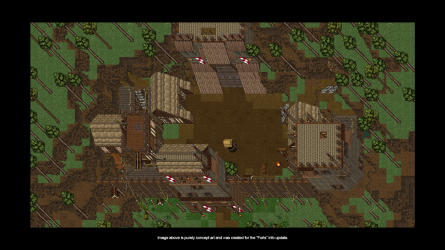 (old pic, not for in-game anymore, just to give an example of the idea)​
A little more about the Forts:

Last but not least, we want to give you a peek at a concept for a biome being worked on. Keep in mind, it's early work and way more variety will be added. We just wanted to play around with colors and find something more unique/original.
(crappy effect to protect the sprites) 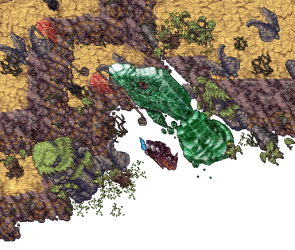 Big things are on the way, multiple, but for now we're going to keep our mouths closed until we got something really epic to show. A local talent is in the studio right now and she's recording a number of epic lines for some videos

GhostX said:
Playstation and Xbox licence fees are around $5k each, plus the dev kits are about $10k. Nevermind Nintendo. Is there really a calling for tibia on console? A 2d mmorpg with a semi dependency on keyboard and mouse play. I can't see this being worth the $30-40k investment just to be considered as multiplatform.
Click to expand...

Who needs to buy those dev kits to make it run on that platform? Last I checked, MANY game engines that are FREE allow for targeted platforming, and I have done so myself , with install and testing... worked just fine, and not a dollar paid...

It's a shame we must do this to protect sprites from corrupt owners with no morals (no names mentioned but their project using tibia sprites and saying they dont...)

Anyways good to see updates in this project. It will be great success
OP
OP

This is a small but big little update that we couldn't hold back from showing off. While it's still very early concept assets, they're already taking form and the identity of Azakelis is coming closer to reality. 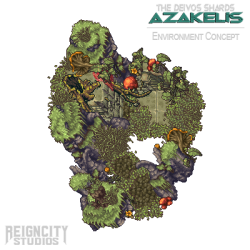 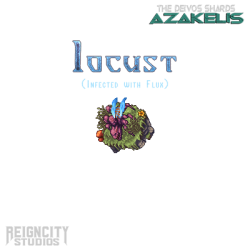 Definetely one of the most interesting things im waiting for, hopefully it will see the light of day in its full glory.
OP
OP

Shiros said:
Definetely one of the most interesting things im waiting for, hopefully it will see the light of day in its full glory.
Click to expand...

This game is a promise, not a dream

Thanks to one of our Discord members being the only one to answer both riddles correctly from our recent skin giveaway event, there's a limited time form open. Check out the link below for some insight on the player's little spirit guide and to sign up for a free Daimon Skin for future use in Azakelis: