I cannot remember about having mentioned you in any post regarding this, also I have neither criticized you nor your server, I have nothing against you or the discord server you own.

The person meant in the picture is Nekiro, I therefore invite you and all the other involved on or reading this thread to have a look at the history of messages yourselves, I'll place them in a spoiler in order to not spam the whole thread that's not about this topic I'm talking to: 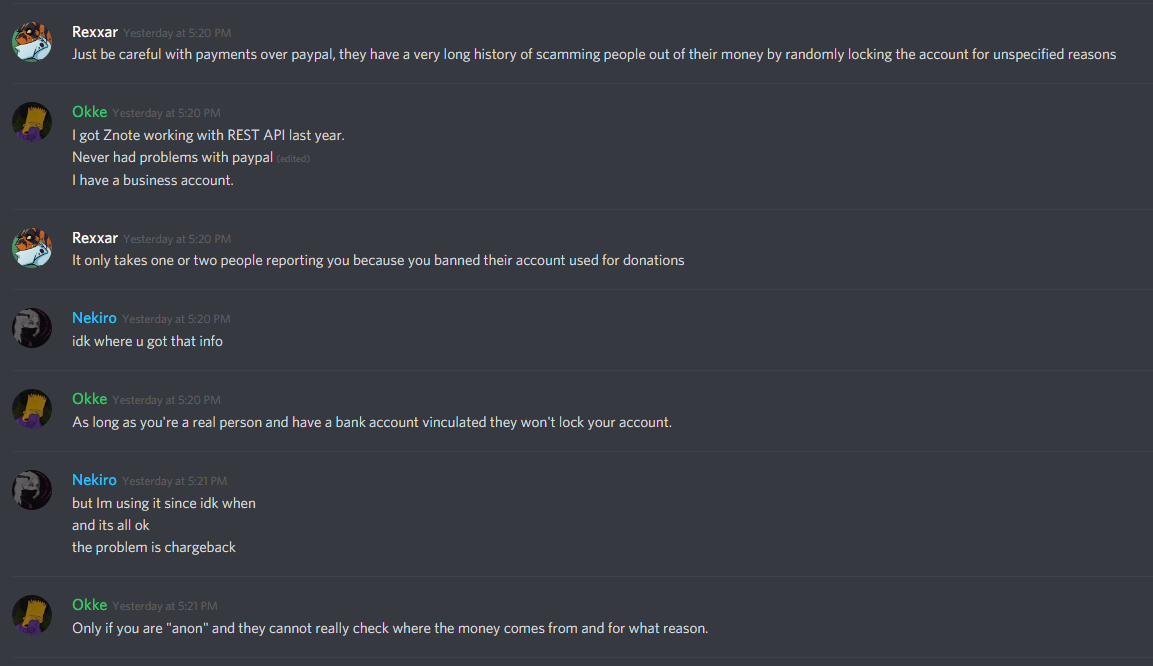 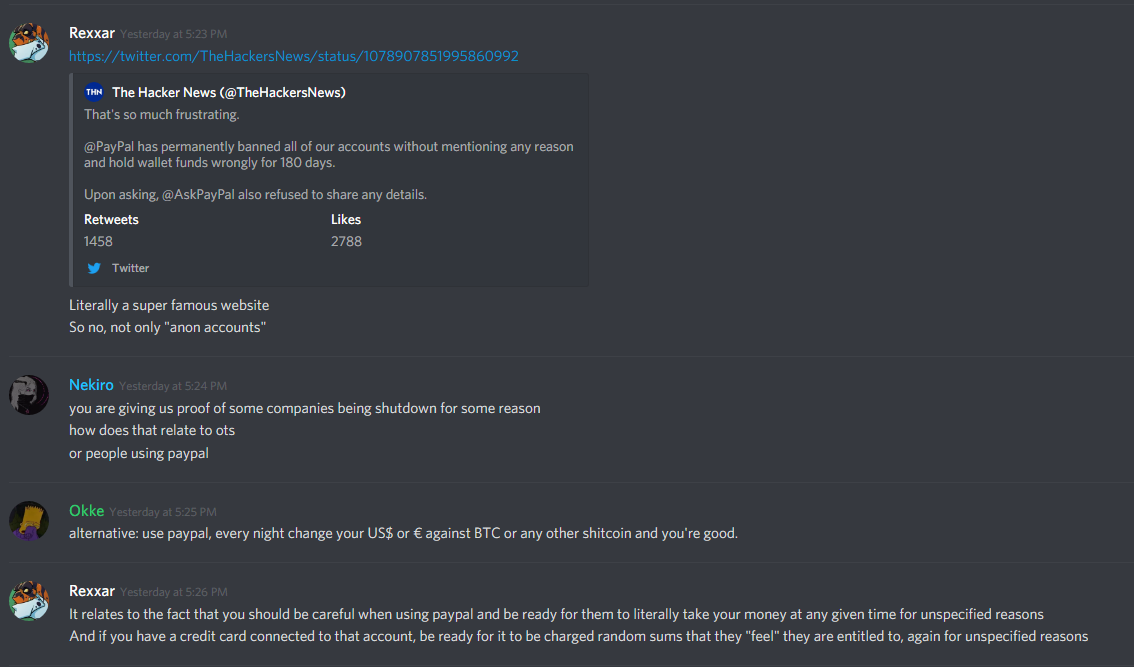 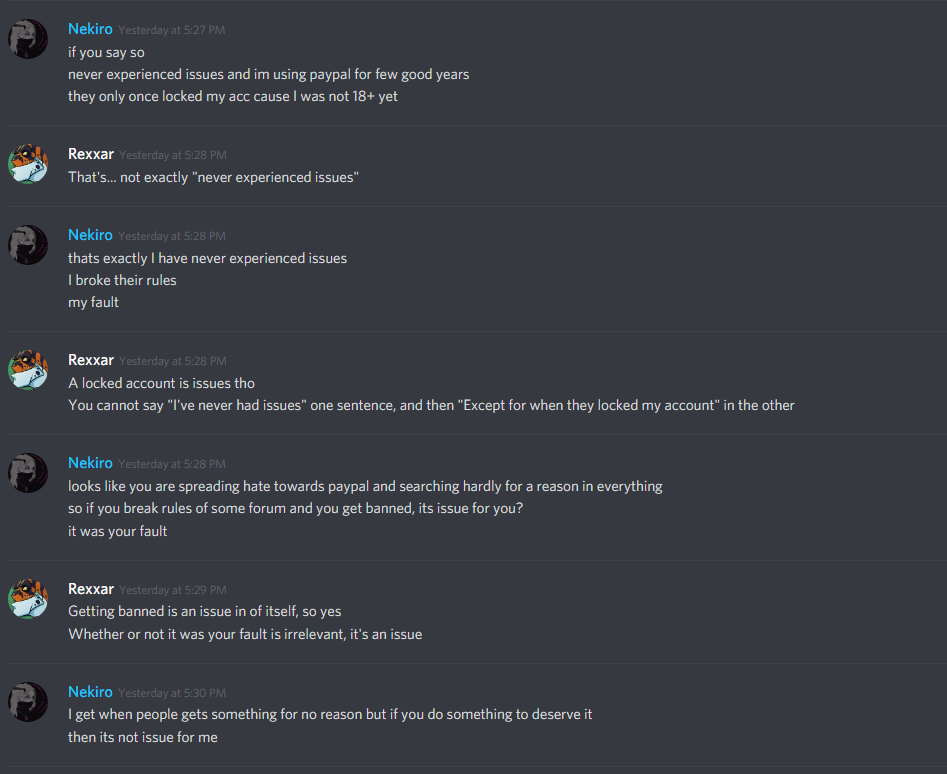 All I can say is that too much drama is involved into this, there's no need to make a tempest in a teapot just due to different opinions on a such a thing. I haven't mistreated or insulted anyone nor have others, the server I mod on (the one from the pictures above) is exactly meant to have such discussions without having to worry that much on words said. If someone says something dumb then people will say it's dumb, it's the internet and there's nothing anyone or any censure can do against it. Haters will hate.

@Okke If you didn't mean me then I am sorry. I thought you were talking about me. I apologize

Can some moderator clean this thread from the offtopic posts? Thank you
Last edited by a moderator: Jan 8, 2019

Cleaned the thread abit, try to stay away from attacking eachother and follow the rules.
OP

-general` under `Server` category as it is for general & off-topic and not necessarily Tibia
- Removed `#Open-tibia` and `#real-tibia` as they were inactive and not needed.
- Added `#

Also a New project called Tibia.xyz has its own channel now

A new blue role called @Contributor has been added.
In order to receive this role, you’ll have to send me a proof of 10 contributions on OTLand!

They’ll have to be a thread! Like a code of some kind, a map, a project (open source), art like sprites (free to use) and so on!


It has to be your own! Send me 10 links to your contributions on PM and I’ll give you the role!

We have 268 threads tagged needss (https://otland.net/tags/needss/) which means they were able to recover the link and reupload the file but the screenshots are gone.

Update:
To make things a bit more simple. You need 15 best answers on OTLand to get the blue Contributor role! Dm me if you have that

please man can u ban codex? there is a reason why he is banned on his 100 accounts on otland already
and we already see him spamming useless stuff in ur discord over and over we dont need this guy here!

this is even worst than the free webcam sites spam! please fix it

Ahilphino said:
please man can u ban codex? there is a reason why he is banned on his 100 accounts on otland already
and we already see him spamming useless stuff in ur discord over and over we dont need this guy here!

View attachment 34225
this is even worst than the free webcam sites spam! please fix it
Click to expand...

So far he did not break any rules regarding our discord server. Banning him is an unfair ban.

Yes, the bot was down so it didn’t catch it, it wasn’t a sex ad, please don’t spread false news, it was a dating ad. Anyways the bot is up again. Thank you
OP

Bump
Feel free to join us to make new friends or just chat.
You can also keep track of some projects there too!

Check out the (Open)Tibia community on Discord - hang out with 534 other members and enjoy free voice and text chat.

We have opened back the support channel BUT only for TFS 1.X

We encourage everyone to upgrade to TFS 1.2 !

The reason I decided to not allow support for anything older than 1.X and open a 1.X support channel is to encourage people to move forward!
OP

If you’re not in the server yet, you definitely should!
Link on the first page !

I'll take a look, even though I am not the most active person within the OT community any more.
OP

Tarek1337 said:
I'll take a look, even though I am not the most active person within the OT community any more.
Click to expand...

Great, see you around!
OP