Ok, so my friend and I have been messing around with OTC (Mehah's) and the sound support there, we both have been making our own custom sound systems for a bit, when we realized there was so much missing from the lua api for sound manipulation in OTC. Not only that, but the sound library that OTC uses (openal-soft) was literally built for the purpose of 3d sounds, and yet, otc has no way of making or supporting the use of 3d sounds. So I have spoken with others on discord and such and seems many people want 3d sound, and some people are even willing to help make it happen.
We started a small group of individuals with this goal in mind, I will not tag them all, but most of you know some of them, enabling the user to have more control over the sounds, and supporting 3d sound. We also wanted to create a little gui "mixer" for lack of better term, with the ability to alter certain sound properties on the fly and eventually save them as a custom "Sound effect". The cool thing is, there are already a ton of presets in the openal-soft library (efx) for us to play with, anyways lets get to the point... @forgee slaved away his weekend to bring us an amazing teaser of such goals already working. Check it out! streamable.com
For more information about this project you can reach me on discord at codinablack#4888, or just ask here

Looks interesting. Will for sure keep an eye on it.
OP
OP 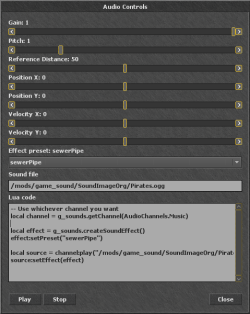 A little teaser for you guys on the progress on the lua side, it creates sample code for you based on the preset right now, will be more things coming soon