New dungeons and quests on the continent of Darama are waiting to be explored by the brave adventurer. Beware, however, because randomly appearing monster hordes might cross your way! New graphics and items have been added and your private houses will especially benefit from the new colourful tapestries, pillows and other numerous objects. Also, many widely anticipated features are now also introduced in this update. Free players will especially enjoy the new login queue which gives them an equal chance to log in. Also the eagerly awaited skill bars and a permanent ignore list have been added.
Click to expand...

Do you remember?
We do, for this reason a thought and idea arose to return to those times. The times when you were sitting and doing runes, training your skills and talking to people.
The times of making friends that have survived to this day, people who will not be forgotten and spending a lot of time together with friends ...


For now it is test server until we are ready to launch final RetroTibia server, which isn't set yet. Have fun meanwhile!
Rates are high - because of testing purpose!​

But why?
We are trying to create the most faithful counterpart of the game from that time. Mechanics, monsters, behaviors, socialization, players ...
That's all you could want and require from a server of this type, we want to introduce and give to you.
Today's gameplay can get boring quickly. Today's OTS with a high EXP rate do not fully correspond to this much older group of recipients.
There aren't many such distributions. Not many people can afford to pay attention to such distributions, be familiar with them and expect nothing in return.

Some info about the server:

Yes, it can go wrong. But why assume so right now?
If there is so much, why is it almost not at all?
Yes, because that's the original.
Yes, Seriously...

According to the rule, no matter how they write, it is important that they write, I invite everyone to comment on this post. Whatever you think about it, please write.
We believe we are fair with our current and future players and have written as is and will be.

The rest is up to you.

If you think otherwise and don't feel like wasting your time playing with us, just don't.
We don't force anyone to play, quite the opposite. We prefer 1 player who will enjoy it, than 10 who will leave after a week.


This is not just another distro that wants to make money and disappear later.
On our server, the only thing that is paid for is a premium account.
We throw the money from this into the jar with the words "hosting fee".

Start 2 servers. One highrate with your own rates.
One mid-low rate with 2,5x rates on exp, skill, magic, loot and 2x normal amount of frags.
On this second server implement two additional rules.
When you die by more than 5 people your death penalty is reduced by 30%.
Players above 50 level are able to buy pvp blessing in all temples.
This blessing protects from loosing regular 5 blessings when dying by players.
It costs 30 000gp.
If it's needed you could disable pvp for first 24 hours or something. Just so whiners and naysayers don't cry.

yeah, also make players walk through each other and add 12.00 client and roshamul
T

Evil Puncker said:
yeah, also make players walk through each other and add 12.00 client and roshamul
Click to expand...

This bless I am proposing grants you nothing besides protecting main bless so any comparison to current tibia is wrong.
Also price could be higher, like 50k instead of 30 or even better adjusted.
OP

@tibia_player according to You, we got to setup a single server to each user
as Youy see - this one we want to do as much possible like real one from those days - and Your hints are too far from that
but thank You for time and for writing that

"
But why?
We are trying to create the most faithful counterpart of the game from that time.
"

Edit, okey gotta change it up a bit, cuz that sounded wayyyy too mean but seriously tho. I mean I've gotten quite fed up lately by all 7.4 servers. There must have been some other version that were kind of okey, no?
OP

Fifflaren said:
"
But why?
We are trying to create the most faithful counterpart of the game from that time.
"

yea, I see You point, but we dont do this for money

^
What about ex Retrocores, says the same and does pretty well. Would't it be more fun if you made for an exampel a 8.6 ot server?
OP

Fifflaren said:
^
What about ex Retrocores, says the same and does pretty well. Would't it be more fun if you made for an exampel a 8.6 ot server?
Click to expand...

that the most PVP demanding ver for me, and I like it a lot
im from those days XD
OP

newer version of client - has been released 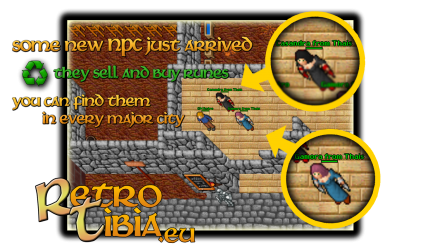