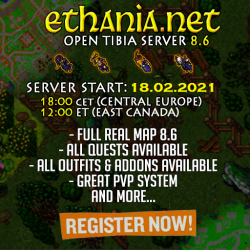 We are glad to invite you to join one of the best Open Tibia Servers ever created - Ethania.net - Ethania has been online since 2011 and it has been one of the most popular 8.6 servers ever. We hope that you'll enjoy your stay here on Ethania!

What is Ethania?
Ethania is a 8.6 real map Tibia server including:

List of war improvements
(In order to improve the wars, we've created a special system just for you.)

Be there at the Opening of this great Real-Map 8.6 massive EDITION!

Is there's anything that you'd expect from a perfect server? Perhaps you'd like to ask a question before the server launch? If so, simply send us an email to: [email protected]. We'll try to answer all of your emails as fast as we can. Please be patient since there might be alot of emails coming through!

With how much effort the owner puts into this cashgrab 2 week server, I hope people think twice about playing here
Last edited: Feb 14, 2021
P

With how much effort the owner puts into this cashgrab 2 week server, I hope people think twice about playing here
Click to expand...

I don't know what he can cash grab either? 500 euros? There is no need to donate either since its pretty orsha OT and its easy to get 180 and fight for 7 days before it dies...

How can no one copy Kasteria/Realera and make somewhat serious 8.6 server to last at least month and a half.