Server will start at 16 February at 17:00 CET (Countdown on website and soon otservlist)
Welcome to our new brand server!
Marlboro Wars it's a server well-known on North and Latin America and now we want to create a new community in Europe, so feel free to create your account.

About the server:
A good war server type "High Level" - out of the ordinary, a place where you can get some fun with your friends or playing against your enemies!
Gameplay has been designed to be competitive - Server is hosted on Germany with 1gb network port.

Since we don't want to spoil you anything, we won't provide you information but we counts with skull system, war system, (frags/deaths/assists) system, (anti) anti-push system, new outfits (by getting assists), detailed statistics etc etc.​
General Information:
Login Details:
You either can use the default 8.6 client or download our custom client here.


About donations:
Besides the items and/or stats we have on our NA server, donation items are more balanced here and not too many, of course that donors will make significantly more damage and better protection but eventually you can get donation items participating on events or exchanging "Hearts" which you can collect on dead bodys and trade them for premium points with the NPC Dementor - All premium points are backed up on our database.

Free Premium Points
Countdown:
We also have bought a countdown on otservlist for a good start. Hope to see you there.

Register with us! Less than 5 days to start

We start in 3 days! Register your account now! Remember to be there at first week so you can get some free premium points ​
OP

More info about our server:

We have several events created, items and such but since we don't want to start big, we will constantly update the server but here is the current server state:

It's a server mostly for war, since is not the ordinary PvP, it's kinda fun, there are 4 types of sets you can get, 1 of those is the donation set (balanced).

Every vocation has its pros and cons, for example, mages need a good level to heal good with healing spells while a paladin only needs magic level, stuff like that. Also every vacation has its own buff spell.

Skills aren't like in others ots, they are very important here, thats make it a competitive game to be the best player.

Push is set to be fast and fun, so you can show your abilities as pushmaster, also we counts with a push arena duel (automatic).

Exp by players and death system has been customized, aswell there is a system to prevent free frags/exp.

Addons can be bought with "soul orbs" and you can getting them by killing players.

On a static event, there are some bosses that drops some few things, one of them very usefull for war.

Items like SSA, Might Rights and Backpacks can be obtained by Soul Points (Every lastHit Kill is 1 soul point you gain).

We have an assist system. You can get a outfit with some good stats by a certain amount of assists, also on our custom client, the warrior retro outfit is implemented and it will require a certain amount of addons to get it (with better stats obviously) but it will be added after the server start.

About the map, the main city is Thais, obviously edited but not so much, there are some traps and such, also venore is crossing a bridge on north thais, so you have 2 options to war.

A broadcast of top fraggers online is enabled, guild ranks, statistics and such, again, it motivate s our players and many other more things you can found on our server and many more we going to add in the future.

TL; DR
Server is designed to be competitive and to motivates you, not just killing people.

We start in less than 1 day! See you there. 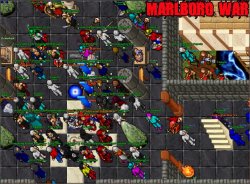