how is connection now? is there proxy for american players yet or atleast better servers? im bored and was thinking about making a noobie land stayer cuz thats the only part of the game thats well made imo..
OP

Proxy server is not available for now.

News!
Firstly, we are doing a survey about most wanted changes and new features, please take a look here. Five players with most valuable feedback will be rewarded with 30 days of Lord Status (nicknames of winners will be posted in public).

News
Hello!
I would like to tell you what's going on right now in RA. Today, we will deliver an update with revamped task rewards and new armor formula. Tomorrow we will add new team quest with special altar that boosts your protection against elements!

Road map
The next thing is our roadmap, plan for future. We are working on many things right now to balance the game but it takes a lot of time, we really need your patience folks! Please take a look below but remember one thing, things may change! 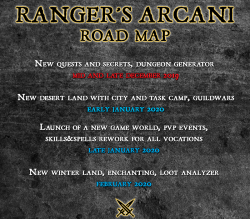 Mid and late December 2019
We are constantly working on adding new quests and secrets to the map. Before the end of the year we want to add fully working dungeon generator with new UI. Some players already had a chance to test this mechanic.

Early January 2020
In the first half of January we are going to add guildwars system connected with conquest of guildhouses. Later you will receive new desert land with new city, npcs, quests, hunting places, monsters and new task camp with new tasks.

Late January 2020
Some of you already know that we work on skills and spells rework. First concept for mercenary spells (and its subvocations barbarian and paladin) was already presented on our discord and in general we see that with some minor tweaks you like it. Later this month we will present you a new spell concept for ranged and mage vocations as well. After we test everything on special server, we will start a new game world (20% of bought points will be added and transfered to the new game world as "thank you" for supporting the server) with new skills and spells system. The first game world will stay online. Together with this we want to add PvP events. We have not yet decided if we should enable open pvp (the concept of going pvp mode for x hours is still on the table).

February 2020
Somewhere in February we will add a new winter land to the game. Unlike the desert land, winter land will be accessible only for players above 40 level. The continuation of Ranger's Arcani quest will take place in this new area. Of course there will be many more new quests, NPCs and hunting places for mid and high levels.
D

Congratulations! Cheering for you!
N

Seems to be a promissing update.
As I said in the feedback, the server is great, but the map is/was (idk if changed already) round, everything is near the main city, all the respawns are up a mountain or in a cave, etc.
R