Helloboys said:
better check thais hostel and guild halls in kazoordoon, bedmages are up and running 24/7
Click to expand...

They're already deleting bed mages, this was uploaded on marcus youtube this morning

The Staff have told and promised me they're against botters and botfarmers. And I agree that they deleted arround 80 accounts. But the thing is people is still selling hundreds bps of runes by facebook trade group. Which it means that deleting 80 accounts wasn't enought. Also saw people selling kk's and there's a guy who's selling 1kk. I'm not complaining at all but I don't wanna waste more time here. If you're looking for some nostalgia where you can see players doing runes with their hands in depot having a nice talk like old times.... this is not the place. Either isn't your place if you looking for the Staff checking and researching those chars that are selling in the Facebook trade group. It's that easy just joining it and research.

In my opinion it's really sad the community that we have nowadays that they just ruining nice low rate servers with their pay2win buying characters, protecting their venezuelans rune makers. What I don't understand is... Why are you playing a low rate if you wanna pump that fast? Please don't come to me with your bullshit of "oh bro it's 2019" or "oh bro we're old and we don't have time". As I know a lowrate is to grow slow that's why it's called lowrate. Tbh the comunity became really crazy about this. Since they taking this game as a business to make full their ego or something. Btw I'm not a tibia LEGEND like everyone is calling themselves on this forum. Probably you guys are super pro but I been playing this game since 7.3 more or less since now. And I remember people use to sell rare items in rl tibia for really crazy prices. But come on.... we're talking about a server where you have the chance to revive your old times when you was a kid playing this game.

I don't wanna offend anyone but I think everyone can share their opinions whenever they talk with respect. Thanks @Marcus and your Staff for working on another oldschool server and don't let our small community die but I don't wanna keep wasting my time while others just do a work of 1 week in 1 day cause they paid whatever they paid.

Anyways I hope everyone that is playing have fun and enjoy the game but this is not what I'm looking for. And wish a really nice ending of year for everyone!

^ If that's true 100 bps, 100cc already in 1 week server? Its really sad to see this game destroyed by makers, and retards who think they will get rich by selling runes on this game, this should be fixed like medivia, you only can make runes with a premmium account, then most of this farms lvl 11-13 without premmy / promo will not exist. But i guess is too late already if people have 100 bps and tons of 100cc already

GM should delete every BR and Venezuelan ip on this server i guess.
M

gm cwelu start ban ppl with 3+ mc,maybe do same like on realesta? you cant login more than 3 character?
OP

Goku said:
Another person with some problems...

It was explained few pages ago...

Otservlist does not show servers with online +700, unless then buy some "premium advertising" there..
Click to expand...

No Goku, there is 650 players online on antica right now.

Well as i have said couple pages ago, server is spoofed and i was right.

Anyone can check it - login to otservlist and try to add server antica.retrocores.com / port 7171

Marcus was always spoofing, nothing changed.

Edit: @Goku no need to edit / remove your post, it's already quoted
M

Goku said:
Another person with some problems...
It was explained few pages ago...
Otservlist does not show servers with online +700, unless then buy some "premium advertising" there..
Click to expand...

You are prolly just stupid to check yourself properly.
H

LOL you bought yellow highlight so if it goes above 750 it was still there now, so you must have been spoofing the shit out of the ot, don't lie and try to say it's because server has more than 750 again because you bought premium advertising after last time xD
S

hmm but why he would spoof this server if so much player play there? xd bubba stream with 1,2k ppl and other streams .. xd i saw whats happening on rookgaard and other exp spots xd
H

because he is greedy, server has alot of players yeah but not as much as he is advertising, also server is full of runemake botters and cavebotters

Anyone else notice alot of players stabding outside depots etc are not even casting spells or anything? Some just stand there for ages, Spoof chars??
Last edited: Nov 18, 2019
A

Kinda sad reading otland, same persons complaining on every single ot server that comes up. Instead of sitting here typing shit with skeleton fingers go play some other game.

i agree with the massive bot farms,
@Marcus what happens with the system you had/have before

to many clients open get insta delete?
or come up with something better I don’t really know.

if it keeps going like this with the massive money and runes so quick. Yes then for sure the server will die out fast.

I remember on mastercores , that was even much easier server ,people got insta delete 24/7 everyday

And now on your serious server 2x

I hope something happens, it’s a good server!

Okay, liars or people who believe everything they see on the internet are spreading some serious false information.

Banished for spoofing?
RetroCores isn't spoofed, I didn't notice it's been banished but probably happened automatically yesterday due to the connect limit that Antica had to go off for.
Whatever happened, it will be back on the list, Xinn checked RetroCores last weekend, and it was fine then, he didn't check yesterday or whenever the ban happened but he's more than welcome to check it out DURING peak.

Hate & Trolls:
There is a lot of hate towards me/RetroCores, just look at some of the haters/trolls here you're gonna see they've said a lot that's not accurate.
And then remember the haters/trolls are everywhere, they're even online in RetroCores.
For example, there's been low lvls claiming they had a bps of cc's from bugs. (kidding me?)
Others claim the game is crashing every 30-60 minutes with 10+ minutes rollbacks (RetroCores has never had a crash yet)
5 minutes after launch someone claimed they had soft boots (not even accessible on RetroCores)
Someone claimed he could finish Rookgaard in 5 minutes because a exp bug (he passed Rook in 8.5 hours, not 5 minutes)
Someone claimed he has stonecutter axe (doesn't exist in any world yet).
Someone claimed 80% of the game is mc/botters (right.. anyone who spent more than 5 minutes in Retro can see that's not true)
Others claim all players are spoof/fake chars (there's no spoof at all in RetroCores)

And the list goes on, claims, claims and claims, made by haters/trolls to discourage players from playing.

But.. the mission of the haters, trying to discourage players from playing IS NOT WORKING.
There's currently over 4,000 active people playing RetroCores (people, as in persons, not characters), over a third of them was online last night, which caused the high records of over 1.8k Characters online.

So, when checking internet, be SKEPTIC about negative things you see, most of it is lies made by haters and trolls.
Even images (I've seen a fake images of Retro there a guy has unlimited cc's in depot, but it's FAKE).
If you want to judge RetroCores and want to know how it really is, login, check the game for yourself, don't listen to the haters!

I decided to upload an image of when Xinn checked Retro for spoof last time.
November 9 that was made (day after launch, maybe 700~ player peaks) 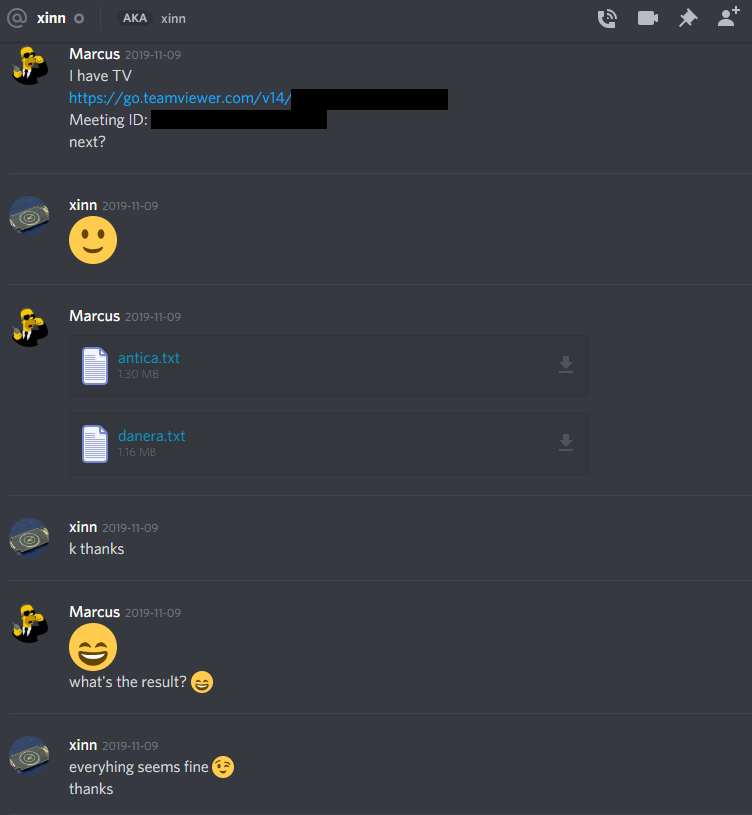 For those who dunno what this is..
1: Xinn contact you to check spoof.
2: You have to setup a TeamViewer meeting so he can see your screen
3: You have to launch a command to generate a dump-file on connections and other relevant things on the matter.
4: You're sending the files to Xinn once they're done, while he's seeing so you do it right and not trying to fake it.
5: he scan the files for weird behavior, he also scans so not more than 4 chars per IP is counted.
6: he comes back with results (sometimes on him own, but often you need to bump him about them)

I know what I've said wont change haters/trolls, they're gonna find new way to lie/hate about it,
But I believe those who aren't trolls/haters deserve a little hit-up on the matter.