What is Ruthless Chaos?

Ruthless Chaos is a low-rate RPG server project that strives to make players recover the unique feeling of playing a brand-new game, while maintaining the important core elements of Tibian gameplay. With 12 years of expertise in development, we can guarantee you that feeling.

This is the fifth season of Ruthless Chaos. Every season brings tons of new content and improves the existing one, assuring a better experience to its players.


We are glad to present: 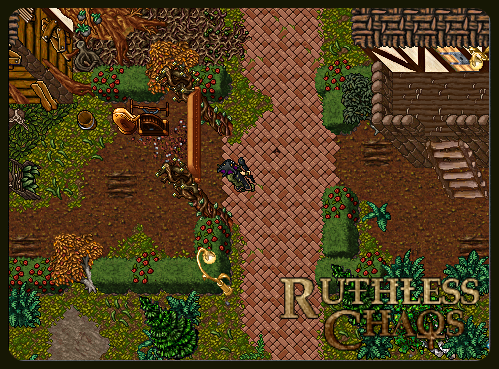 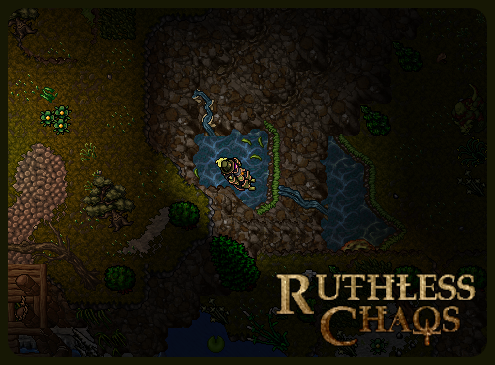 Ruthless Chaos has a fully custom vocation, the Shaman. They are a hybrid class able to switch from tanky close-combat fighters to long-range spellcasters. This vocation uses clubs as weapons, and can enchant them with elemental powers. Shamans have mastered the elements of earth and energy. When casting spells from a distance, they have powerful single-target abilities, while in melee combat they are able to deal large amounts of area-of-effect damage. You can read more about the vocation here.

Another not yet revealed location is to be launched during this season!

Professions offer a whole new way of upgrading your character in different ways. Blacksmithing focuses on crafting gear to suit up your character for every possible situation. Alchemy allows you to brew long-lasting elixir and short-term effect battle potions, as well as creating inscriptions that summon special creatures to aid you in battle. The newly implemented profession, Jewelry, is based on crafting gems which upgrade your equipment in unique ways. Leveling up and questing are no longer the only ways to enhance your character!

In order to minimize the learning curve for new players, the four original tibian vocations and their concepts remain unchanged. However, we have added several new spells with custom mechanics and tweaked existing ones to add variety and introduce new playstyles. You can read all the details here. 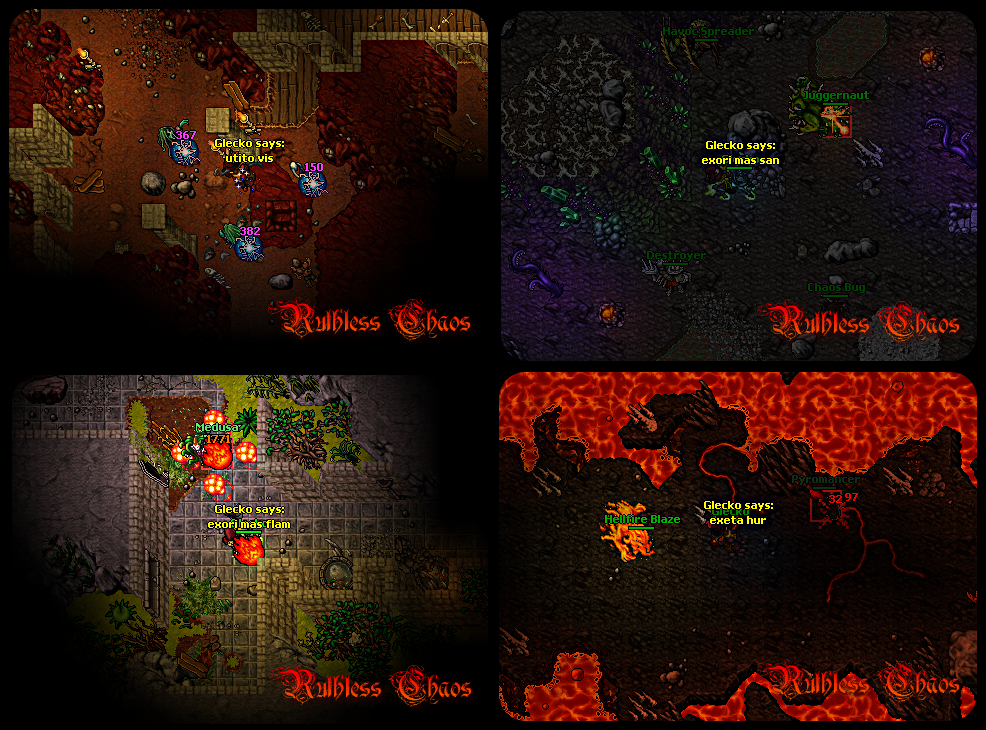 Dungeons are special quests, designed for groups of 5 players. Along each dungeon, each filled with custom-made monsters, you will find some bosses, which drop special pieces of equipment. These quests require strategy and teamwork, however, the rewards you get out of them are far better.
Every dungeon can be completed by a player as many times he wants.

The Ruthless Chaos quest used to be the final challenge of this server up to the last season. In this quest, you will wander deep into the core of Hell itself, to find and slay the Ruthless Seven, to secure the new human kingdom from the terrible influence of the demons.

Starting from Season 5, and after the heroic defeat of the Ruthless Seven last season, a new endgame objective was introduced into the game. In this season, once the Ruthless Seven have been defeated deep in the hellish realm, a completely new storyline will be revealed to the players, along with a new final challenge.

Expect brutal and dynamic challenges which involve strategy, teamwork, a competitive team and lots of courage! 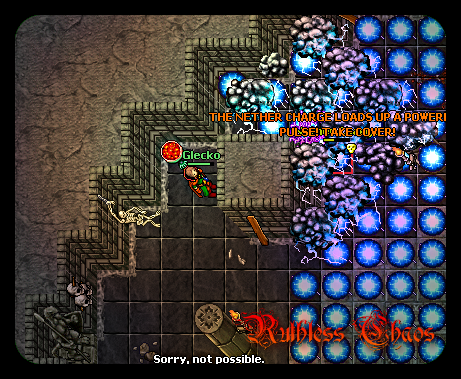 You can read more about these topics and other features of Ruthless Chaos here.

Elites: Every monster on the server, has the chance to spawn as an elite, with improved strength and loot. 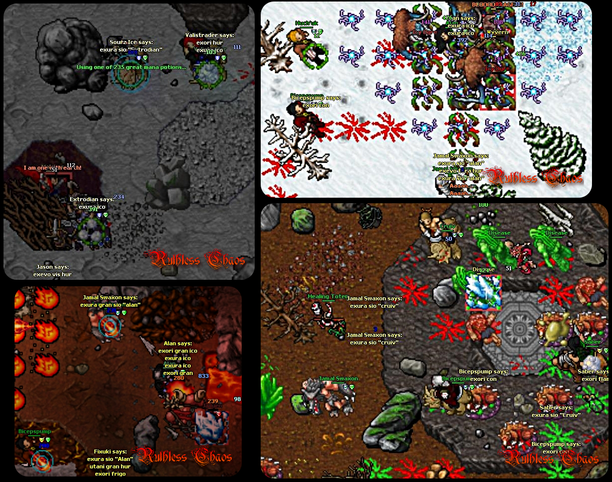 ​
Feats of Strength: Be the first one to complete the most epic challenges in the game to earn a mention on the hall of fame on the website. You can see the challenges that are awaiting you here. 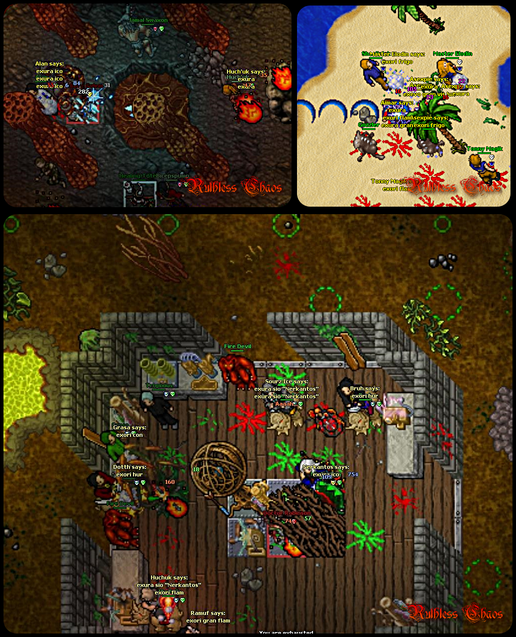 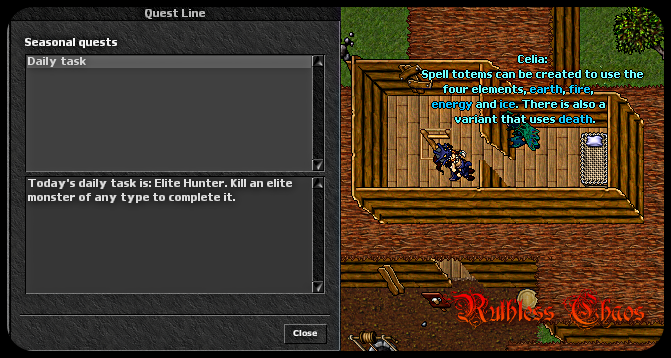 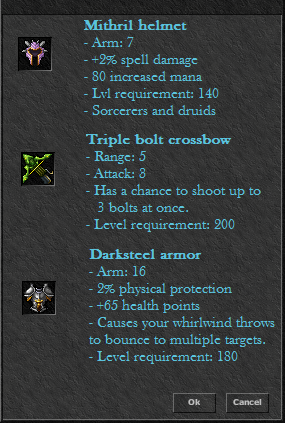 Join our discord channel to interact with the community and talk with the developers!

Like us to be the first one to know about upcoming updates and news.

Subscribe to see our videos. We will upload update teasers and all kinds of server-related videos.
​
OP

<Reserved for links to teaser posts>

Launching on the same day as DeathZOT and I wanna play them both soooo badly
Still hyped tho!

I still consider Ruthless Chaos to be the best server I've ever played. It provided me with the experiences of a life time that no other server could provide me with. A long term serious custom RPG with professional staff and an extremely developed server. I think the main reason I enjoyed it so much was because I ended making a group of friends and we all joined voice chat which made playing together way more fun. Fighting bosses, exploring new content, dying painful deaths, collaborating on theories, and the list goes on!

Beautiful mapping and atmosphere. Tons of secrets, riddles, and other goodies to find. Uniquely scripted bosses all with their own AI. You can expect to die plenty of times! Custom items, spells, monsters, and vocations. A captivating story-line! Professions. Other cool features.

Everyone on here is useful, so the more people there are the better it will be. Tons of people are needed for bosses, exploring content, collecting sardonyx, etc.. everyone gets to play a role! I'm very excited to see the content after the Ruthless 7 and what kind of vocation will be released midway!!

I'll be watching from the sidelines so I encourage people to make some cool videos and collect footage of bosses fights and new content!


Shade ~ said:
Launching on the same day as DeathZOT and I wanna play them both soooo badly
Still hyped tho!
Click to expand...

I tried to change their mind about releasing it on the 31st and that there are tons of people who would want to play both deathzot and ruthless chaos. I guess I respect their choice. They will still get all the hardcore RPG players as there are many that don't care for deathzot. I won't be able to play either server since I'll be on vacation lol sad face.

Its so funny when you check Vocation spells and the shaman has so many spells like of all 4 other classes together lol.

Destruckto said:
Its so funny when you check Vocation spells and the shaman has so many spells like of all 4 other classes together lol.
Click to expand...

Isn't it because only custom spells are listed, and shaman is the only completely custom vocation?
OP

Wirox said:
Isn't it because only custom spells are listed, and shaman is the only completely custom vocation?
Click to expand...

same day as deathzot what is this

agree, dont think both server have a lot in common or appeal to the same players

Super excited for the launch

Advertisement thread up and running again!

It's true. To afk and let your char level up or do other tasks, isn't fair. If you played Runescape, they had this anti-afk/bot puzzle. I wish Servers would do that. Or at least make non-afk players have more nice rewards. Also, afk-training (I am one of them), is unfair.
V

As Zasranets states earlier, probably the most enjoyable server I have played aswell. Well scripted Bosses and questline that keeps you occupied for MONTHS.