The one with straight vision.


Meleh said:
Can you please make Rashid to buy "beastslayer axe" and "Wand of Inferno" ?
I have lots of them and cannot sell
Click to expand...

No. You can add it if you want to (I can show you the way, but not the destination) or you can donate for requests like this. It's a small testserver and I'm busy working on more important issues to make the server fully stable, add house auctions, tutor system, etc.
E


The one with straight vision.


No. You can add it if you want to (I can show you the way, but not the destination) or you can donate for requests like this. It's a small testserver and I'm busy working on more important issues to make the server fully stable, add house auctions, tutor system, etc.
Click to expand...

Where is the POI teleport located at? Can't find it
OP

Edit:
Poi dls will work after tomorrow's SS (on sun 14th). I forgot that you can't even fully enter the cave by default as well as some other details.
There's a new entrance, and the traditional one with a tible will not work. You'll have to find the new entrance on your own.
Last edited: Oct 14, 2018

If someone need help with EQ, let me know
OP

News:
* Got a #pyot2 channel on the OpenTibia discord server thanks to Amiroslo.
* Made a new discord server: OTWorld to bridge the communication gap between my three main projects: Realots.org, PyOT2 and OTWorld, in case anyone are interested.
There's different channels for chatting, asking questions, etc.
Keep in mind my discord server is brand new and I haven't invited anyone, and it's likely going to be very small if not completely empty for a while.
OP

I've been told that the discord invitation link to this OTWorld/Realots discord server has expired, so here's a new one that hopefully shouldn't expire:
OTWorld/Realots Discord
Please let me know if it expires again. Cheers

Yes, it should be.
U

the teleport on desert dungeon is not working, tried for hours :/

my char name is Ginukeji
U

I lose passwords for my characters. @e.e help
M

How its going so far ?

You made some progress?
And you have some time in your mind when you totally finish the programming stuff for launching this awesome server ?

Greetings, and keep it going!
OP

What's up @Keviino.
Nah, I haven't really worked on this at all since last year.
I lost most interest in this project because it's just too much tedious work for almost no love.
I've also realized that a lot of players actually either has no idea how authentic real tibia was even like, or doesn't care even a little bit and just want to play on actual pay2win or fake servers with fake advertisement just because of the hype or whatever.

I've also been backstabbed by pretty much everyone I've successfully helped in this community that's asked for my help since I registered here in 2016.
It's not like I even trusted them with anything important or expected anything in return, I just didn't expect for them to literally try to stab me with the closest equivalent you can get to a knife on the Internet for no other reason than pure random selfishness and evil.
This has made me realize that this "community" isn't actually a real community at all anymore, but a literal industry run by lowly Internet thugs, cyber criminals and trolls that just wants to raise hell, sniff coke, inflate their ego, and make as much money as possible on desperate Internet video game addicts that are looking for the next pay2win kick, much like in the story of the lost wooden boy.

Moving forward I'll still be working on at least one OTS project, but I'll likely be moving further and further away from this community and perhaps launch my own game independently or something instead if I decide to pursue this other OTS project to its end.

There is a chance that I'll try to launch a server if some changes happens in my life as expected sometime soon, but change precedes change and so on.
U 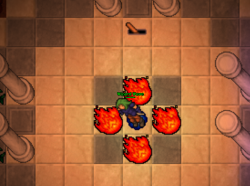 It seems Dario doesn't sell light bolts anymore, where can I buy them?