Greetings, everyone,
Do you remember your first Wyvern? I hope so! I personally remember my first Wyvern the same impressive as my first Dragon I accidentally found the new ramp near the POH in the Venore where there is a single spawn of him. I thought lets try to kill him and it seems that it was pretty much impossible for noob but the hopes was big. I ran to the depot and took like 20 health potions and was in plans to show him some nice spear hits. I killed him. However I wasted about 20 health potions and looted few coins and dragon ham. I thought oh you poor bird and what a waste I had...

The Wyverns are the first 7.90 monsters which will appear in the Sabrehaven after the Server Save today! I hope you all found this as a nice entrance in to the 7.90 map content updates which are planned to come now more often and often. The Wyverns can be found from now on such places:

Ohhhhh nostalgia hitted my heart! They were really dangerous for low lvls I remember!
OP

Sabrehaven is Twitch Friendly!
Do you like to stream your gameplay? Or maybe do you like to watch how the other plays? I hope we had atleast one Yes with you!
In Sabrehaven website I have created Twitch Streamers page where all the Sabrehaven players can integrate their Twitch account with the Sabrehaven account and showoff your content in the Streamers page. All you have to do is update you Sabrehaven account settings with your Twitch username and you will automatically appear in the available Twitch streamers list! Greetings, everyone,
several important bug fixes has to be announced officially.

The issue number one: It appears that NPCs which sells amulets with charges were selling them with max amount of charges (65k). The issue was fixed due to kind people report and every amulet which had corrupted charges have been removed from players inventory/depot/houses.
The issue number two: Monster spawns which were implemented in the 7.8 & 7.9 protocol update had incorrect re-spawning rate (which was approx. 1 minute or less) this were an incorrect re-spawn time and now have been fixed to spawn time approx. 5 minutes or more.
Bonus fix: the Wyverns are immunited to drunkness now

Sorry for inconveniences and thank you for staying in the Sabrehaven. Hope to see you in-game! Hey, mate,
Are you looking for a nice server that is not going to reset any time soon with the active support and great community? Join Sabrehaven now!

Let me share with you several great moments that were shared in the Sabrehaven Discord! 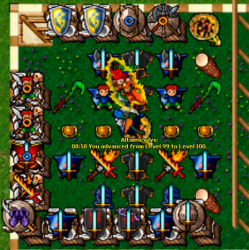 First 100 level achievement have been achieved! Sabrehaven is running for 70 days and there we have the very first hundred!​
OP

Probably the most wanted new feature is coming in the Sabrehaven really very very soon! The tasks system which will be a similar copy of original Tibia however with some custom spices. The development progress have just started and I hope that you can meet your hunting companion Grizzly Adams sooon! Have you tried Sabrehaven server yet? Well, the best time to do so is now!
​
See you in game!
OP

Greetings, Sabrehaven People,
Probably the most wanted new feature is coming in the Sabrehaven! The tasks system which will be a similar copy of original Tibia however with some custom spices. Please meet your hunting companion Grizzly Adams which is located in the Port Hope! Greetings, everyone,
Let me introduce you the second best partner for low level hunters in Edron city the Daniel Steelsoul!

This tasker NPC will give you low creatures tasks in Edron City for level 6-49. Also, there were slight increments in the Grizzly Adams tasks reward so hunters get ready your weapons because the rewards now are even better! Stay tuned for more tasker NPCs and look for updated information in the hunting tasks page. Greetings, everyone,
The newest Open Tibia Client is already available in the Downloads page. If you are using the old one then download new now!

Since some of you already noticed quite several bugs occurred with the current downloadable OTC I have updated the client to the newest version available. I hope that this will solve out the majority of bugs that you were experiencing! Greetings, folks,
The second entrance of the 7.9 content is coming in the Sabrehaven!

The pits of inferno quest based on the leaked 7.72 Cipsoft map parts. This is not a secret that the Sabrehaven map is already based on the 7.72 Cipsoft leaked resources and the pits are already under the POH however unaccessible. The great goal of that is to finish the pits of inferno quest on the existing map parts while revealing everything what Cipsoft have been developed in the past years and forgotten in the development stage. So this pits of inferno will reveal the secret paths, different maps and everything originally as was left in the 7.72 leaked map. I believe that this will be an amazing experience for everyone to re-explore the POI in its first origins. Greetings, everyone,
the start for the newcomers have never been more friendly than now! I wish to announce several improvements regarding the packets control per second rate from a same IP address. The current changes should allow to actively play (hunt & walk) for about 5 players from the same IP. This changes also impacts people who wish to login/reconnect very fast multiple times in the same time frame. If you are noticing an unexpected client disconnects or debugs from now on please report me ASAP!
The following improvement will prevent the server freezes lag from unwanted load: Moreover, from now on the website infrastructure have been divided in to different server websites separated in the sub domains: Greetings, everyone,
please meet the new best trader in the Sabrehaven the Rashid.

Rashid is no doubt one of the most wanted missing NPC in the Sabrehaven world and here he will appear after the next server save. The Rashid is a traveler trader and can be found in different cities every day. The only difference is on Mondays instead of Svargrond he will spawn in the Thais depot because simply that city doesn't exist in the 7.92. Furthermore, the Rashid will not require any quest to complete and will be free to trade for everyone. Lastly, the loot which you can sell for him was made regarding an archived wiki page of 2007 which may be found here: Rashid - TibiaWiki. See you in-game and don't forget that Rashid on Friday will be in Darashia, in Miraia's tavern! Have a refreshing Friday everyone!​
P

I hope you will do a good advertisement of the server (otservlist.org, etc.) and on server start will be ~ 300 players
OP

We wish to announce that we have developed very unique affiliate system which will help to benefit from yours invited friends donations! Invite your new friend to register with your provided affiliate link or tell for existing friend to apply your affiliate code in the settings page and claim 10% of his spent shop points automatically! Sharing is caring

Programmer Sabrehaven is looking for developer