Mister Budex said:
I do not see a point to have a disscusion with this kind of people, all they want is to attract the attention of the players and they do it, nobody from their team is good, none of them has a good past.
Click to expand...

Shiet is this jesus talking ? You're the messiah! Andjelo stfu ur sad man trying to act like ur the perfect human being. You haven't done anything except bringing toxicity to the community xD Funny ppl trying to shit talk servers for no real reason.
Theres no real reason for hateing on this guy who made Frozeria.
What has he done except makeing a good/bad/average OT?
Resetting a server today is not a big deal literally every server resets a few times every year.
The majority of all server that's upcoming lasts for 1-2 weeks.
Why hateing a guy who literally only started hes server because people asked for it.
Haveing spoofed characters? Look at all 7.4 servers where people has 15 - 20 rune makers (I've been there my self)
Or any server that you can bot on.
People are botting multiple accounts using 20 + accounts botting on 1 server.
According to otservlist there is 13 k players online on OTS right now.
So you can start by dividing all server counts on otservlist by 4 since the majority of the players on every server has either rune makers or bot characters.
And may i add didnt you ask Frozeria about makeing a 7.4 OT with him wanting to be partner with him literally less than a month ago? xD
Shiet haters gonna hate hate hate hate
C 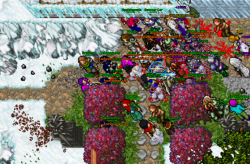 A new season of Frozeria with OTservlist countdown advertise.
Previous season was not advertised at all and we managed to reach over 200 active players.
Alot of our old and dedicated players who contributed by donating or giving feedback has asked us to launch a new season with more advertise.
With this said we are excited to announce the new season of Frozeria with alot more focus on advertisement to reach a broader audience and gain stable player growth.
We provide you with the best up to date custom content with unique systems that offer immersive gameplay and character investment
On top of all this we also added/updated alot of new content.
5 New Events.
3 New Dungeons has been added.
Reintroduced the boss room. (Can be found in Chryse)
Website has been updated. (More information & guides available everywhere)
Some mission lines has been adjuested.
Small balance changes has been made.
This is just a few things thats been changed.
Join us next season to see all the amazing updates we have done.
Next Season starts: 15/04/2019 19:00 CEST
C

man already banned on otservlist again... can we have 8.6 evo run by a guyy that dont get their ots banned on best ad platform ??
C

Bakeiraqie said:
Shit ot, i know 100% you were the ones that hacked my account in Spider cause i only have same acc name and pass in both froz and spider. I changed my acc name and pass. You filthy shit
Click to expand...

Why would a OT server whos been around for what ? 8 years + hack their players?
And you are the only one to ever complained about it ?
Doesn't seem even slightly possible that they hacked you.

Cryptera said:
Why would a OT server whos been around for what ? 8 years + hack their players?
And you are the only one to ever complained about it ?
Doesn't seem even slightly possible that they hacked you.
Click to expand...

If what you're saying is true, how come I got hacked? Only two OT's that I had same acc name and password. Anyways, shit ot so.
C

Bakeiraqie said:
If what you're saying is true, how come I got hacked? Only two OT's that I had same acc name and password. Anyways, shit ot so.
Click to expand...

Dude, I said earlier there were only two ots that I had the same acc info and it was Frozeria and Spider. And I got hacked in Spider. The thing is I had my previous problems with the admins in Frozeria. So I figured it out easily.
You must log in or register to reply here.
Share:
Facebook Twitter Reddit WhatsApp Email Link
Top