EXP Raidin' with the Outcastians! 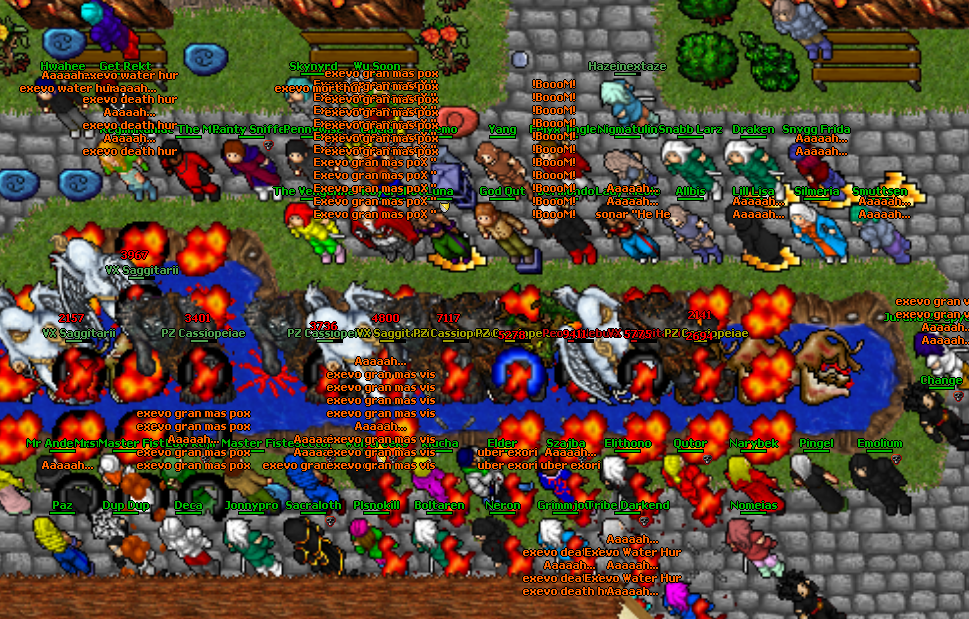 yeah i agree, its a gr8 server!
OP

We'll have an EXP Raid again today (A great chance to catch alotta levels) also various other events like a massive TEAM WAR after EXP Raid and so on. We'll also go mass questing today and I will stream it, so if anyone is into questing and wants to join, now is the time! Countdown timers for the events are on the frontpage at Outcast OT Open-Tibia Server | Old school OTs 7.6 Tibia - THE OUTCAST

And a little bit of fixin

General Updates
-Created a new Wiki for the Outcast located at wiki.outcastserver.com
-Added a few Clips to our Youtube Channel at youtube.outcastserver.com
-Added a portal leading to temple at the end of Wand Upgrade Quest
-Fixed various map bugs reported by Outcastians at Underworld of Axxion
-Fixed a bug with Aether and Aratron Wand giving 2 extra magic levels
-Added Dark Overlord, Helarctos, Red Ripper & Mungrorath to the Boss Run
-Added one extra Morgaroth to the beginning of the Boss Run in Edron
-Added Marianas Set to loot drops of Red Ripper, Mungrorath and Dark Overlord
-Added Aether & Aratron Wands to loot drops of Osiris & Red Ripper
-Added detailed descriptions to all the portal signs in the World
-Returned old portals leading to the Monkey & Elven Islands inside the World
-Added 3 Necropharuses all around Tarid and 1 Dharalion to Elven Island
-Optimized the World for higher FPS & smoother gaming experience
-Fixed various map bugs reported by Outcastians all around the World area

Shit I forgot to watch it yesterday and it doesn't work on mobile app. Gotta get home!
OP

Its an epic clip! By the way, check your PMs on Outcast Forums, I sent you a little some something.

Downloading it now. I'll check it later when it's downloaded
OP

Dropped a few updates for the holidays! Ohh and we'll have an insane EXP Raid tonight and some team wars afterwards. There will be no EXP Raid next week due to Sunday being 24th of December.

Happy and peaceful holidays, everybody!
OP

And of course, the EXP Raid will be an epic one tonight since we havent had any EXP Raids during the last two holiday weeks. Due to our little EXP Raid break, we'll be giving out EXP Vouchers and rare gear as well to a few lucky players during these events!

Countdown timer for all the events can be found from the front page at http://outcastserver.com
Last edited: Jan 14, 2018

Yeah, hopefully more people will stay and fight for a little longer as they get used to the whole low level battling thing. It was fun, though, everyone having equal levels and so on.
OP

Anyone need a level 145 level Mage/Paladin/knight for the team wars? Drop a message to "GM Announcer" with your account number and the name you'd like to have for the character. We're having organized low level team wars today (100 to 150 level players are only allowed to join), these battles will begin right after the EXP Raid!

And as mentioned previously, we'll have an epic EXP Raid!
OP


General Updates
-Added new Gaming Sessions playlist to our Official Youtube Channel
-Added instructions on how to recover a lost account on the website
-Added a new item called Amulet of Infinity, which is an infinite AoL
-Amulet of Infinity costs 500 CCs from Al Estwel & Blessimus Smeagol
-Alternatively it can be purchased from the shop for 1300 Shop Points
-Added a new set called Templar Knights Set to the Shop
-Templar Knights Set is identical to Zeniths Set, except for its look
-The following items were removed from the Donation Shop:
-Crystal Arrow, Pink Bunny Slippers, Boots of Purple Blood,
-Warlord Armor, Amazon Armor, Amazon Helmet, Osiris Mask,
-Tribal Mask, Finger Ring of the Hasty, Post Officers Hat
-Removed the ability to use magic walls during the Zombie Event
-Added the following new special rewards to the Zombie Event:
-Golden Raptor's Amulet, Pieces of Templar Knights Set
-2 or 8 Day EXP Boost Voucher Runes, 2 secret extra rewards
-Lowered amount of CCs from 20 to 10 as the reward of Zombie Event
-Fixed various mapping errors at Plains of Gold reported by Outcastians
-Added signs with descriptions of rewards and rules to the Zombie Event
-Modified broadcast message of Zombie Event to include its rewards
-Added a teleport back to the teleport World from the Sibang Island
-Fixed signs at the Boss Run to show correct directions for travellers
-Removed PZed tiles that blocked movement at Cyclip Shield Quest
-Fixed map bug which blocked entrance to the Fallen Gods Labyrinth
-The following bosses now give 45 task points per kill:
-Helarctos Malayanus, Alpha Doradus, Arm of Doom, Hydrocon,
-Xarptorius, Red Ripper, Mungrorath, Dark Overlord, Cyclip God

Catch ya'll in the game!
P

Fast otsik guys really hard . Tune in its easy to get enough lvls to fight and train on fastest pvp out there.

Glad to see that Joel never give up !
OP

Pod Karacz said:
Fast otsik guys really hard . Tune in its easy to get enough lvls to fight and train on fastest pvp out there.
Click to expand...

Totally, its that quick hand PvP!

andjelo96 said:
Glad to see that Joel never give up !
Click to expand...

Haha yup, Ill never give up

General Updates
-Added 1 huge area, 3 new Quests, 15 new bosses and multiple new items
-Lands of Mysticon can be found behind Wizard of Visualis at Fallen Gods Quest
-Cyclip Shield can be upgraded to Oceanic Lizard Shield at Lands of Mysticon
-Butterfly Kit 3, Botanists Container 3 & Cyclip Shield are needed to upgrade
-Butterfly Kit 3 and Botanists Container 3 can be found by exploring the areas
-Added a new armor called Cyclip Robe that can be obtained by completing a quest
-Wearing Cyclip Robe with rest of the Cyclip Set gives a boost to HP/MANA Regen
-Added a quest for 2 day +75% EXP Boost Rune, the quest can be found at new area
-Added Orion Trixus NPC to the mid part of the area for a safe return back home
-Added multiple portals to the Quests that lead back to the Temple & Depot area
-Added new Quest Mechanics that can be seen by going to the Lands of Mysticon
-The mechanics include things such as new ways of opening locked passages
-Added multiple new Mechanical Bosses that execute actions when killed
-Optimized movement/speed in a major way which results in smoother gameplay
-Changed Edron Pass name to Outcast Pass, it will be used for quests in future
-All 15 of the new bosses now give 45 task points per kill

Come blast it out, fellas!

You should reset this orshabaalek server , instead of doing some exp events.

You would have more players then.

Add pvp enfo and remove spam spells when you hold the key.

I know that these spells do not work then, but such spam looks too no good.

Then It could be quite an interesting orshabaalek server.

I'm sorry for criticed, but server it is not cooked for new players, when they see lvls 500+ and the comic sms shop.

Tampik back said:
You should reset this orshabaalek server , instead of doing some exp events.

You would have more players then.

Add pvp enfo and remove spam spells when you hold the key.

I know that these spells do not work then, but such spam looks too no good.

Then It could be quite an interesting orshabaalek server.

I'm sorry for criticed, but server it is not cooked for new players, when they see lvls 500+ and the comic sms shop.
Click to expand...

This is not type of server like others which is gonna to have restart every few weeks/months.

PvP Enfo Is not good idea. Its useless. Its Not War Server.

Not cooked for new players? Server is online since 2006, there were only few restarts and now u say they are not cooked?
Did you even played Outcast? if much higher level kill lower level its gonna be notation, after some notations u will get automatic ban.
No, its not gonne be quite an interesting orshabaalek server. This is the best mode as Joel hold it.
he need to do restart once he fall with players. For now hes pretty fine

Normal pvp it's boring type to all type servers need much exp on boring monsters.

Monsters no got brain they use only 1 tactic all time.

Old times i little play on this server for a few days, it was boring.

It's a Orshabaleek with boring normal pvp and exaggerated items in the store sms.

These people have stopped in times and do not know what a good server is.

And some stupid system when someone accidentally will kill a smaller lvl with a spell and they got automatic ban >>>> nice great system.