Who cares about pvp on 15 lvls?

Here are some people from our server, -- Timestamp(55minutes into the video)

had a lot of fun playing this server xD
congratz for opening, i'll play for sure 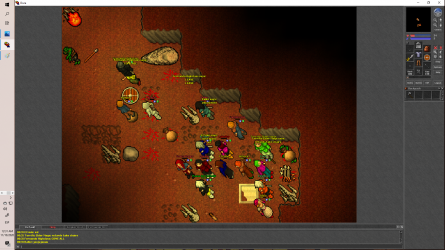 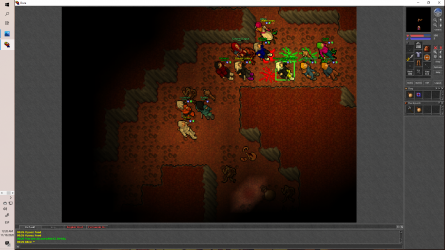 I reccommend people to try it out. I'm having a real fun time playing here!
S

Open Sourcerer said:
Then dont atk? Are you here only to kill ppl and act like a jerk?
Click to expand...

What if your target drops 1K gold, or some other good loot? 100% backpack drop rate if you don't wear AOL.
What if your target isn't wearing any/much healings or a poor balance of damage/heal?
What if you kill people that are hunting and aren't prepared with the proper resources?

Also in PVP, if you trap or are a better player compared to your opponent, you can get away with lesser cost.

Adposatnr said:
You pick druid/sorcerer (druid is better at this point) to abuse that ppl got no supplies/no eq/no skills/no runes and u can make them as one of first players so u win every fight for the best spawns first day as your power is strongest early on then u lose against rp/ek once they get weapons runes and skills (fight will costs u too much to for little gain) next power spike is once u can summon demon skeleton/orc leader and last one when u can kite people for sd/ue combos on open or simply one click with sd if u got better team

Pvp is terrible now as even if u fight 10vs10 ur highest combo cause of 50% field nerf dmg (and wrong formulas for runes/spell dmg) is around 150 thus u cant quickly down one or two enemies u can watch janusz trap fight when torgowica breaking their defence as with correct rune dmg they should simply combo gfbking mage
Click to expand...

Lets assume he corrected lmm/hmm dmg so u start with correct base dmg (10-20 lmm, 20-40 hmm) then one lmm would deal on avg 75 dmg vs mobs and hmm 150 thats pretty playable even at start and for pvp wasting ppl with lmm would be way better than dealing op combo with 10 ppl for 30

He lowered mana cost for lmm but even if u count that it is way way worse mana/dmg than orginial 7.4 atleast until late 50lvl's and that affect heavily every vocation not only mages
Last edited: Nov 10, 2020

A team waste months of work waiting for your commentary.

Recommended, but change fields dmg to old ones.
OP

But we reduced the cost to buy the spell and mana-cost to cast the spell by more than 60% each. If we did that it would overpower it for low-level PvP.

Please tell me what you think. I'm not sure if you knew the above info or not.


Could you tell me your foundation to say that?

Since many of our players do not speak English or Read our Rules carefully they take it for granted in this day and age you can MC/rune-make-macro. Therefore we have adopted a policy to make sure that a transgressor clearly understand what he did was wrong and tell him if he does it in the future he will be Deleted.

I check the server religiously and we have very little macros/bots/MC'ers. There are some though, but we catch them quickly and delete them.

As well, we as staff do not spoof any characters. Most of us run on 2 GMs at a time though to answer multiple problems at once. I myself run 2-3.

Dura Aris said:
But we reduced the cost to buy the spell and mana-cost to cast the spell by more than 60% each. If we did that it would overpower it for low-level PvP.

Please tell me what you think. I'm not sure if you knew the above info or not.
Click to expand...

Adposatnr said:
check orginal cipsoft files and use their formula
Click to expand...

yeah they're useless for low lvl without decent base

anyway it's custom ots so whatever

Maps said:
field rune shot direct deal half dmg in pvp
step on field after 5 seconds dmg is full
a little strange maybe but that's how it is in cip leak

yeah they're useless for low lvl without decent base

anyway it's custom ots so whatever
Click to expand...

starts around 7:20 watch carefully what they doing and throwing
if u want just fire field 12:10

MuminFlex said:
You guys need to put a list of custom spells / items on website somewhere asap,
The wiki / information on website is completely empty with 0 information, u had time to add shit on there and didnt add any basics ?
Click to expand...

We originally wanted people to have to figure things out by using Spellbooks. However it seems those days are past because everyone has been expecting there to be spell incantations of the website. So ye, we are going to likely add that in the future.

MuminFlex said:
I just think you added a few trolls south of venore and u think is enough, every exp place has a hard monster, you should add a few more bullshit trolls and bugs on surface somewhere so people can atleast collect few gps not fighting for 1 bug spawn in venore

Still once you train up a little bit, find a friend who has fire fields or spears you can make it through. Use flowers/parcels in caves. Rope eachother when checking new spots. Its hard but its something different and pretty fun actually xd really makes you think to overcome obstacles at start


Also the food system should be changed, I never seem to get full and it dissappears in a few minutes having to leave and fish every 10-15mins
Click to expand...

We extended food capacity to 30 minutes instead of the original 20. This way people have a better quality of life experience. We did it because of the aging player population. We want them to be able to multi-task.

Do you think you can make a consideration about monsters being resistant to energy/fire all the time?

As a sorc solo you will find that every second monster is resistant to fire or energy, and 1 in 10 will be resistant to both of them.

I dont think its a bad idea, but it would feel better if it would happen a bit less often than it does now, every second monster.. not asking to remove it, just make it slightly more rare? change the thing where u cant parcel soulbound items.
So difficult to move your depot somewhere else when u have lots of items an cant send parcel cos of 1 item.........