Hi everybody,
Our first edition after a few years break, was successful with more then 200 players online for more then 2 months! (On a custom map believe me it's enough for fun game and wars!) those who playd - knows During the time of first edition we have fixed everything on 101%. Everything... and we hope the second edition will get more then 300 players and will stay for more then the last one during coronavirus epidemy that makes all of us tired of the situation. #StayAtHome 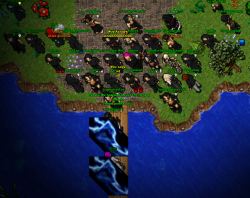 We decided to change few things like buying / selling items / potions / runes etc. Selling and Buying will work now by command !buy / !sell (available only in PZ).
There will be 3 stage's to access on selling things:
Also:
So, i would like to invite everybody for our Second much better edition!

Are you tired of searching new playable 8.6 server? No right place to play? All servers around are based on Real Map and staying alive 1 month? At 13th of December its gonna change!

There are waiting for you guys completly revamped old arenas aswell as many new hunting places, to not get bored 2fast!
We thought it would be nice to introduce some old school into 8.6 version, so we decided to change few things like this:
We've removed protection zone (PZ) from boats
Magical vocations (Sorcerers & Druids) will do more DMG with spells when they're higher LEVEL(normally only magic level matters)
The weight of POTIONS & RUNES was increased, to avoid players hunting 24/7 without refill
Here are some of the basic quests on Exodis, known well to old players. You can see levels of difficulty on the server page, clicking on any player.
Some old movies and screenshots to remind how it was.

Hope to see you guys there!
S

Best server i've been playing on, ever ! I heartily recommend this OTS, im playing every edidtion, and this time there is many new things. Great pvp, and profesion balance. There is RPG elements as well. Exp percentage + per every profession in team, many quests, that You cannot do alone. See You there. Love it !
OP
I