→ I announce the first server, in final stages of programming, of the Lab Z Games.

→ We are working tirelessly on the scripts, creating and perfecting innovative systems in order to give continuity to the RPG that CipSoft unfortunately has lost over the years. [Google Translation]

→ Without further ado, let's go to the details and intentions of the server and to a small "ShowOFF". [Google Translation]


→ As is customary to read in outreach topics, generally quoting that the OTServer in question is not focused on profit, etc., traditional text to see, may be - at least at the beginning - a truth, although many of these end up getting lost Following the path of financial return, which sincerely - being very realistic - is much desired, only they end up leaving the entertainment and what is more important to keep players on the server, aside, things like RPG, fun, History, missions / quests, etc... [Google Translation]

→ My real intention is to recover the RPG of Tibia Global that had been gradually lost since its version 7.6, where the items had considerable values, where the negotiation of items was something of great importance, where there was a cycle of sociality among the players, where characters Stronger in the game passed a certain "respect" to the others, which ended up encouraging others to strive and win items and riches in the game, etc... [Google Translation]

→ What do we see in Tibia today? Rare items that were only found in Bosses are sold at extremely symbolic prices since the launch of task systems that came to take their value, 1KK (100 crystal coins) being sold for less than $ 20 in websites, and for Having that amount in a character in Tibia Global was basically unbelievable to others because of the difficulty of getting money, maintaining the character (runes, potions, items, etc), upar, who would say accumulating high amounts like this. [Google Translation]

→ About 10 years ago, I had a low-end server (4x), totally non-profit, where at the "opening" many players said it would close soon because the experience was very low and the loot very difficult, On my personal computer, it was online between 10 and 16 hours a day (at the time my mother shut down my computer with the server on, etc.) ... And yet, I reached a loyal group of players who volunteered to be donates Donors) if I took the server seriously, because it was very hard (it was when I started my interest in scripts), I added spells that the Client still did not support (eg exori hur diagonally, Client 7.6 did not have, I added With an adaptation, as I did with the obsidian knife, blessed wooden stake, etc.). [Google Translation]

→ Over the years, seeing that there were no good options for OTServers and for liking the area, it came to my mind to create where all the above "failures" were taken as priorities, and hence the idea of Lab Z Games. [Google Translation]

→ With the TEMA GLOBAL, we go to the "features" of the server that will be in Beta Test on the next February 3rd. [Google Translation]


→ The mission to have privilege to capture souls of monsters newly dead is important so you can cast them in training cabins scattered around the main cities of the server. This server doesn't have "trainers" as usual, we created this system to facilitate the training of abilities of the characters, however, without facilitating the game thus maintaining a good RPG and creating another kind of trade in the game, because the souls captured in forms of runes will be marketable items, as well as the cabins can also be rented to third parties.

→ Traning Cabins: These are located in the main cities of the game, some cities has more than a cluster of cabins.


→ Some information about a training cabin: Following the numbering of the image in the link below, you will be able to identify the positions and functions: 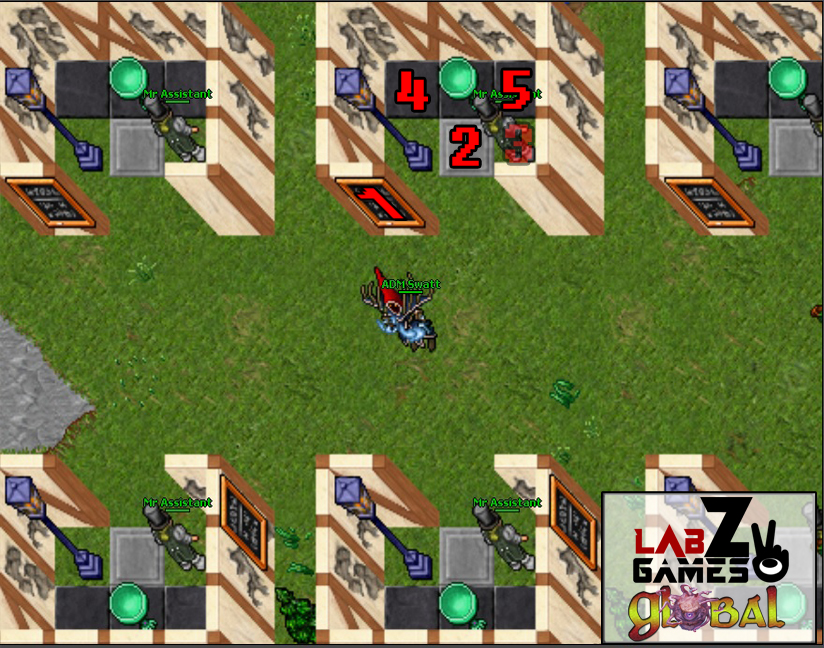 1. Blackboard:
This will be the information of the cabin, giving look, If this cabin is not rented, displays a message similar to this :


08:23 You see a blackboard.
You read: Training Room: 010.​
If this cabin is rented, displays a message similar to below:


08:28 You see a blackboard.
You read: Training Room: 010.
Owner: ADM Swatt » Until: January 10, 2017.
COST: 20000gps per 30 minutes.​
NOTE: A player (other than the owner) that want to train for 30 minutes paying the fee mentioned above, will be passing this value to the Account Balance the owner of the cabin, automatically when step on training tile.

2. Training Tile:
This, marked with the number 2 in the picture, has the function of confirming the training, when stepped on in this will be debited from your account balance the amount of gold coins marked on the blackboard of the cabin and in the programmed time your character will be automatically kicked out.

3. NPC Mr Assistant:
These NPCs that are only found in traning cabins has the function as a BOT for the players who left his character training.
They makes available to characters in training cabins some basic survival functions , attack and magic level training.
The NPC Mr. Assistant also offers the function of self-renewal of training, that is, if you're going to be away from the computer for more than 30 minutes (the programmed time to expel a player in training), You can declare as many renovations you want to do automatically. Ex: If you programming 2 self-renewal in the NPC, your character will be training for 1 hour and 30 minutes without getting kicked out.

4. e 5. Training Monsters Positions:
These tiles are where the monsters are conjured with the runes where their souls were arrested .
The owners of the cabins can summon monsters to your own training and make your traning cabin interesting for other players rent to train and you profit from it.

For this, players need to take steps from the Black Art Mission, where each stage can gain more experience in the area and capture souls / essence of more creature types. [Google Translation]

→ 1.1 – CABIN & BOT: Because the server forbids the use of bots, and at least for training it is almost acceptable for the player to spend some time away from the computer, I have taken the liberty of creating NPCs that are located in all training booths , Where when speaking with it, the spells are set up so that your character is training his magic level (Magic Level) with attack spells or healing automatically according to the minimum life or maximum mana programmed in the NPC itself, That characters in the training position rely on the "anti-logout" (position where the character will not leave the game due to lack of movements in periods of time) to prolong his training journey. [Google Translation]

This article can be found on our website that will be posted here during the week, before the Beta Test day for account creation. (Label: Library → How to Do) [Google Translation]


→ Why use?
The Depot Protected was created in order to protect rarest items, to access it you need to be a Premium Account and create a protected depot password.

→ How to identify them?
In every city, they have the same details that differ from other depots, see in the following image:
You can see basic differences following the numbering of the image: 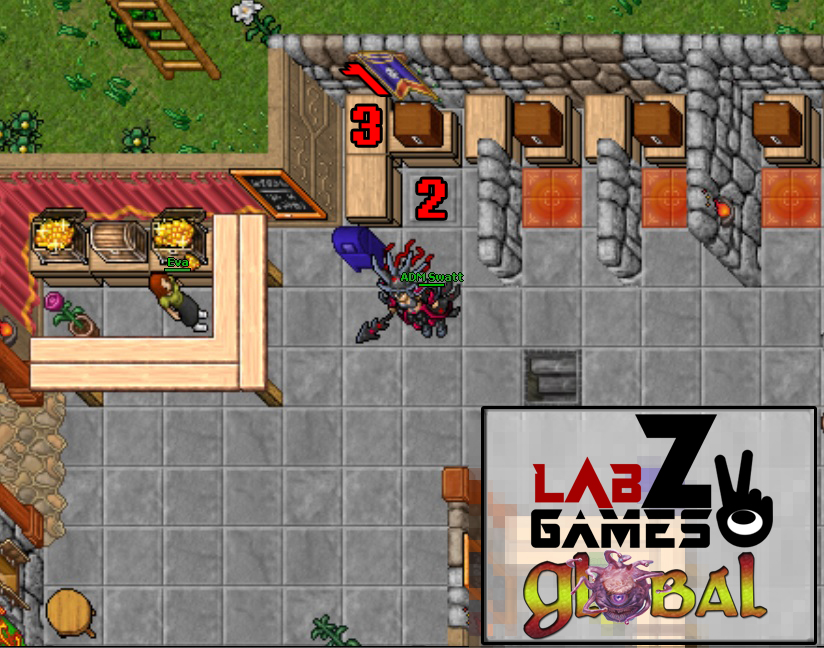 1º - The banner located on the wall where it is.
2º - The different tile, it's like a button that's pressed when stepped on.
3º - Place where the letter to password insertion will appear.


→ Important Note:
These Protected Depots are interconnected in any map, everything in it can be accessible from others Protected Depots independent city is.
Worth noting that there are limitations of items to be stored in it, that is, it does not accept any type of containers, so it doesn't become one and the main depot and spoil the RPG of the game.

A newly created account on the server starts without password protection to the Depot, but to create it or change it is very simple, just go to any NPC Banqueiro do servidor em follow the steps:

Create a password:
It's very simple, just go to the Bank NPCs that were cited above and follow the conversation:
Hi > protected depot > yes > senha.
See Image


Change the password:
Is also very simple, just go to the aforementioned Bank NPCs and following the conversation:

NOTE: If you enter an incorrect password 3 times, you will be blocked the change password until the next day.

In a few moments you will receive an email with your account informations, including your Protected Password Depot.

NOTE: If you registered an e-mail invalid on account creation, will cost 5 Premium Points to change it.

→ New creatures, like the big boss Gaz'Haragoth and yours minions and nightmares.


→ In addition to the standard Tibia Global fishing system, I decided to create a somewhat more advanced system, where I have the ability to fish more rare fish besides serving for missions, also serving as food regenerating some stamina points to your character.

→ The server will be focused on a good RPG, from the PREMIUM system that will be very close to Tibia Global, where Premium Account will be able to travel by ships normally (with cost) and Free Accounts can only travel to Free and 3x cities per day, After these trips, will only be able the next day. [Google Translation]

→ Some spells will also be reserved for Premium Account, however some extremely useful ones will be released for Free Accounts, such as: utani hur, exori, etc. [Google Translation]

→ To have a good Free Accounts hunting area, we leave the city of Darashia as a FREE city, however, we will create more hunting areas in every city, exploring any existing map. [Google Translation]

Lab Z Games reports that the global server is ready.

The server is on new version/theme, where BOTs are accepteds.

The server is on new version/theme, where BOTs are accepteds.